By Newsroom on November 21, 2018Comments Off on Snickers Brings Back Clemenger BBDO’s Award-Winning ‘Hungerithm’ Promotion at 7-Eleven Stores in the US

For the second year in a row and just in time for the holidays, Snickers in the U.S. is bringing back ‘Hungerithm,’ a tool that monitors the mood of the internet. When consumers drop hints of hunger online, the coupon discount of Snickers increases at participating U.S. 7-Eleven stores in real time. 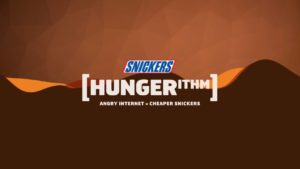 To track the mood of the internet, as well as lock in the price of a Snickers bar that can be redeemed in the form of a coupon at participating 7-Eleven stores, fans can visit Hungerithm.com. In-store signage explains the program to shoppers. The ‘Hungerithm’ promotion will be live through midnight Dec. 31, 2018.

Originally piloted in Australian 7-Eleven stores in 2016 to critical acclaim, ‘Hungerithm’ was developed by Clemenger BBDO Melbourne under the “You’re Not You When You’re Hungry” campaign. 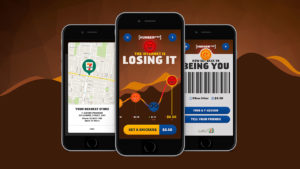 The algorithm checks social media posts in real time against a list of 3,000+ commonly used words and phrases to determine sentiment and capture a snapshot of how people are feeling. It even understands slang and sarcasm. As ‘hanger’ goes up, the coupon value goes up too.

“The holidays can be a stressful time for everyone, and the internet reflects the mood of the season,” said Josh Olken, Brand Director, Snickers. “‘Hungerithm’ offers a fun way to navigate this time of year with Snickers, offering that moment of satisfaction when you need it most.”

Snickers Brings Back Clemenger BBDO’s Award-Winning ‘Hungerithm’ Promotion at 7-Eleven Stores in the US added by Newsroom on November 21, 2018
View all posts by Newsroom →