By Newsroom on March 20, 2014Comments Off on Sprite & LeBron James Mix It Up to Create a New Limited-Edition Flavour

NBA superstar and cultural icon LeBron James has made thousands of spectacular plays during his basketball career. But this spring, he’s changing the game and taking his creative expression off the court to collaborate with Sprite on a unique, new flavour.

Sprite 6 Mix by LeBron James is the first limited-edition Sprite flavour formulated in partnership with the NBA champion and cultural icon. The game-changing beverage combines the refreshing taste of traditional Sprite with a splash of cherry and orange flavour. The flavour formulation, packaging graphics and product name of Sprite 6 Mix were co-developed with James to truly reflect his style and taste preferences. 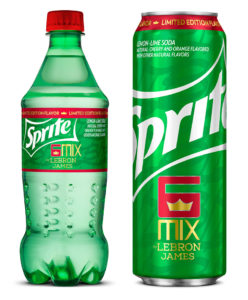 “LeBron James is the perfect partner to bring our fans new product innovation,” said Kimberly Paige, Associate Vice President, Sprite Brands, Coca-Cola North America. “We’ve enjoyed an amazing relationship with LeBron since he entered the NBA in 2003, and we’re proud to have him contribute to Sprite in a meaningful way that we know will excite Sprite lovers and his fans.”

Beginning in mid-March, Sprite 6 Mix by LeBron James will appear on store shelves nationwide for a limited time. It will be available in 20-ounce bottles and 19.2-ounce cans, and will be sold in convenience retail and value stores. Special packaging for the new flavour features a custom logo sporting James’ name and jersey number, and his initials appear on the background of the label. The packaging also features a custom “6” with a crown integrated to represent James’ most popular nickname – “King James.”

“Growing up drinking Sprite, I never imagined I would have my own flavour someday,” James said. “I had a great time working with the Sprite team to turn my favorite flavours into a pretty cool variation of one of my favorite brands. I’m proud of what we created and I’m excited for my fans to try it.”

Sprite 6 Mix by LeBron James will be supported by a multichannel advertising campaign. The effort will include a 15-second commercial and digital videos featuring James and his marketing team during a real working session at LRMR offices in Akron, Ohio. Out-of-home on digital billboards and digital banner ads will feature the product and campaign tagline: LeBron Has Changed The Game. Again.

Fans of Sprite can enter cap codes from each bottle of Sprite 6 Mix by LeBron James online or via text to redeem instant rewards, including LeBron street art wallpapers and music download codes. Plus, enter codes to win prizes including a signed LeBron James jersey, autographed cans, UNKNWN apparel, gift cards and more.

Sprite & LeBron James Mix It Up to Create a New Limited-Edition Flavour added by Newsroom on March 20, 2014
View all posts by Newsroom →