Following on from the successful 2017 social campaign, 2018 sees a new chapter of Curly Tales arrive, with the creation of 5 little films for each of the 5 little pigs that feature on the Squealing Pig label. The films begin with a line from the classic tale, before spinning into an unexpectedly modern and humorous interpretation of pop culture.

Jack Elliott and Lochie Newham, creative team, J. Walter Thompson, Melbourne said: “The opportunity to build on last year’s Curly Tales platform with some even curlier films was one we relished. By restricting ourselves to the brand’s colours and collaborating with some of the best in the business, we were able to create a modern world for these five classic characters.” 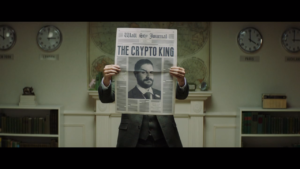 Clive Coleman, brand director, Squealing Pig said: “The Squealing Pig brand brings playfulness and fun to a category (wine) that can take itself far too seriously. The films bring to life this quirky and irreverent personality via stories of each of our little pigs on our label. The films not only look great but are also very entertaining.”

The films will play across social, Moonlight Cinemas, video on demand and through Treasury Wine’s ‘Living Wine Labels‘ app.

Capitalising on the growing popularity of spritzed wine in a can, Squealing Pig has recently launched two new products to its existing portfolio of award-winning wines – Spritzed Pinot Grigio and Spritzed Rose. Both 250ml can products have claimed second and fourth spot in the canned segmenti since launching in July this year.