By Newsroom on August 4, 2016Comments Off on Stella Artois & The Roots Release An Original Song That You Can Taste 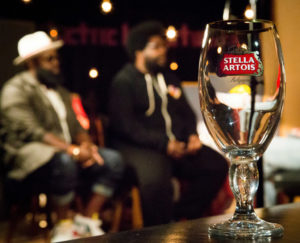 Stella Artois announced a partnership with hip-hop band The Roots to release “Bittersweet,” an original song you can taste, as part of its summer-long campaign, “Host One to Remember.”

The campaign, which launched this June, honours a legacy of unforgettable hosting moments, tapping into some of today’s most innovative hosts to showcase the inspirational future of entertaining. The Roots produced “Bittersweet” to complement and enhance the flavour profile of the iconic Belgian beer.

“This project fuses two of our passions: music and food,” said QuestLove, The Roots. “As someone who loves to experiment in the studio and in the kitchen, this crazy unique collaboration inspired by Stella Artois was the perfect challenge. You really have to try it to believe it; it will change your perceptions of food, science and entertainment.”

The Roots experimented with different pitches, instruments and music styles to create this original, multi-sensorial song that stimulates the ears and the taste buds, based on the research of Professor Charles Spence of the University of Oxford. Professor Spence found that there are surprising connections between the senses (hearing, vision, touch, taste and smell) – when one sense is stimulated, it triggers an effect on the remaining four senses.

These unique findings from this new field of research, known as “crossmodal correspondences,” inspired the band to produce two versions of “Bittersweet” to complement the various flavours in Stella Artois – one high-pitched version (above) that triggers the enhancement of the lager’s sweet, fruity notes and one low-pitched version (below) that enhances the bitter notes.

“Bittersweet” is now available on YouTube, and a music video will be released later this month, allowing people everywhere to engage their senses this summer and take part in a one-of-a-kind experience highlighting the power of sound and taste.

“This summer Stella Artois embarked on a mission to leave a mark on the world of entertaining and inspire people to host their own unforgettable moments,” said Harry Lewis, vice president, Stella Artois. “Our collaboration with The Roots continues to push us to that next level of creativity – offering people the chance to experience the incredible taste of a Stella Artois in a new, memorable way.” 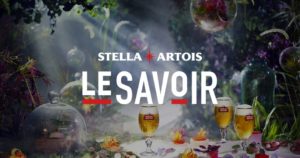 To close out a summer of inspiring fans to elevate their own hosting occasions, The Roots will perform both arrangements of “Bittersweet” at an exclusive seating during the opening night of Stella Artois hosts “Le Savoir,” a multi-sensorial dinner theatre experience in New York City.

“Stella Artois sees ‘Le Savoir’ as a window into the aspirational future of what hosting could become,” said Lewis. “We’ve worked with a special group of creators to curate an interactive experience that blends food, music, theatre – and of course Stella Artois – that we hope leaves people feeling inspired to rethink entertaining.”

At “Le Savoir,” Stella Artois is bringing together culinary wizards Bompas & Parr, 45 DEGREES – Cirque du Soleil’s events and special projects company – and The Roots to create an unexpected experience that stimulates all the senses.

Guests will be transported through the seasons during a multi-course dinner featuring food and beer pairings inspired by the spectrum of flavours in a Stella Artois. “Le Savoir” will take place in New York City at Skylight Clarkson Square from Wednesday, August 17 –Monday, August 22, 2016.

Stella Artois & The Roots Release An Original Song That You Can Taste added by Newsroom on August 4, 2016
View all posts by Newsroom →