By Newsroom on August 29, 2013Comments Off on Study: McDonald’s, Burger King Rely on Giveaways, Not Food, to Lure Kids 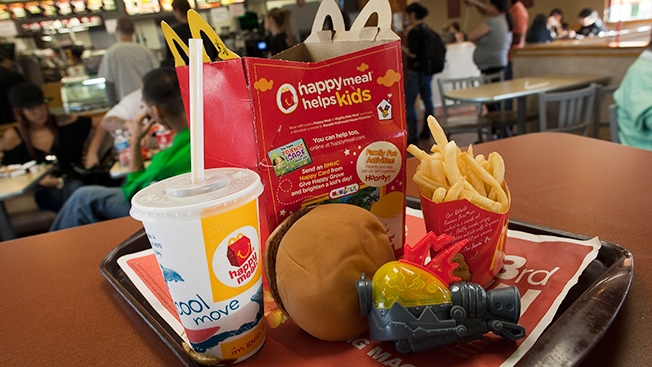 “When we first saw the ads, we were shocked. It’s hard to tell with the kids ads what they are marketing; food was an afterthought,” said Dr. James Sargent, a professor of pediatrics in Dartmouth College’s Geisel School of Medicine and one of the six researchers that conducted the study.

The researchers examined a year’s worth of fast food ads on national TV between July 1, 2009 and June 30, 2010, examining the ads frame by frame. Nearly 99 percent of the fast food ads targeting kids were either from McDonald’s (70 percent) or Burger King (29 percent). The vast majority of the ads (79 percent) aired on four networks: Nicktoons, Cartoon Network, Disney XD and Nickelodeon.

While the companies are living up to their nutrition pledge as participants in the Children’s Food and Beverage Advertising Initiative by agreeing to advertise only healthy food like apple slices and milk, the healthier foods may not have been shown in a way that kids might pick up on it, Sargent argued.

“The industry’s own guidelines say companies need to be careful with premiums and tie-ins because children aren’t capable of fully understanding them,” said Sargent.

The guidelines of the Children’s Advertising Review Unit specifically caution advertisers on the use of premiums. “Since children have difficulty distinguishing product from premium, advertising that contains a premium message should focus the child’s attention primarily on the product and make the premium message clearly secondary,” the guidelines state. 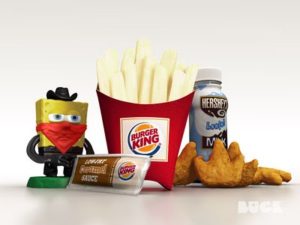 CARU director Wayne Keeley took issue with the study’s methodology, which counted frames to determine how much emphasis was spent on the food versus the premium. “CARU does not require that a specific number of frames be focused on the food versus the premium and certainly the fact that ads directed to adults may show food images in a larger size than a child-directed ad is not dispositive. The content of the entire ad and net impression guide CARU’s determinations,” Keeley explained.

By CARU’s standards, both McDonald’s and Burger King have been model participants in the self-regulatory process. “Both companies have always respected CARU’s recommendations by discontinuing the challenged ads, and pledged to take into account CARU’s recommendations in their future advertising,” said Keeley, who added that there haven’t been any recent cases involving either of the two companies.

Noting that the study was based on three-year-old data, McDonald’s said in a statement the study does not reflect its current advertising nor its commitment to “balanced choices, nutrition and active lifestyles in 100 percent of our marketing communications to children.”

The fast food marketer also took issue with drawing a conclusion about the restaurant’s commitment to industry self-regulation on a comparison between adult ads and kids ads. “These two audiences are vastly different and the comparison is not an adequate measure of our compliance with the self-regulatory commitments,” McDonald’s said.

Since the study was conducted, both McDonald’s and Burger King have made changes to their kids’ meals and their advertising, said Elaine Kolish, vp and director of the CFBAI. “Our independent monitoring shows that, as promised, both have limited their child-directed advertising to meals meeting meaningful nutrition criteria. Both also have made improvements in the kids meals they advertise to children compared to 2006, before CFBAI was launched,” Kolish said.

Overall, food companies are spending less money targeting kids and most of the 19.5 percent decrease came from fewer ads on TV, according to Federal Trade Commission report released in December.

Study: McDonald’s, Burger King Rely on Giveaways, Not Food, to Lure Kids added by Newsroom on August 29, 2013
View all posts by Newsroom →