By Newsroom on June 23, 2015Comments Off on Tecate Light Invites Consumers on “One Bold Night” with their Iconic Black Eagle

Tecate Light, the Mexican light beer with full flavour, debuted the latest chapter of its “Born Bold” campaign in the form of the short film, “One Bold Night.”  Delivered in four easy-to-watch 60-second episodes, the new films depict the iconic Tecate Light Black Eagle experiencing an epic night from gritty, basement boxing match to penthouse party, all shot from the point-of-view (POV) of a friend’s mobile phone.

To further engage their consumers, Tecate Light fans 21 and older are invited to continue where the film left off by submitting photos of their boldest night out with friends. The best photos submitted through the brand’s Facebook and Twitter channels using #OneBoldNight will be transformed into branded social media posts, with consumers competing for the most “likes” and “shares.”

The winner will receive a bold party from Tecate Light for them and friends, which will be filmed, edited and released as the epic conclusion to the “One Bold Night” film.

Directed by Todd Bellanca, and created with Saatchi & Saatchi NY, “One Bold Night” is the newest component of the “Born Bold” campaign, and continues the flight of Tecate’s Black Eagle that began earlier this year on TV.

The new film complements the brand’s on-going social engagement strategy to create culturally relevant content, delivered in bold new ways that resonate with their bi-cultural Hispanic audience. It is pushing these boundaries through the use of YouTube’s new Playlist Card platform for the debut – making Tecate Light the first Hispanic and alcohol beverage brand to use this innovative technology introduced earlier this year as an evolution to YouTube’s existing “annotations” feature.

“Much like Tecate Light’s Black Eagle, bi-cultural men were born with an extra something, and it’s that bold x-factor that comes to life in both the content of our new ‘One Bold Night’ short film, as well as the way we’re debuting it,” said, Belen Pamukoff, Brand Director of Tecate. “Filmed using the increasingly popular POV-format, we’re excited to see how the use of the new technology from YouTube translates to our audience, who we know heavily consume content on their second screen.” 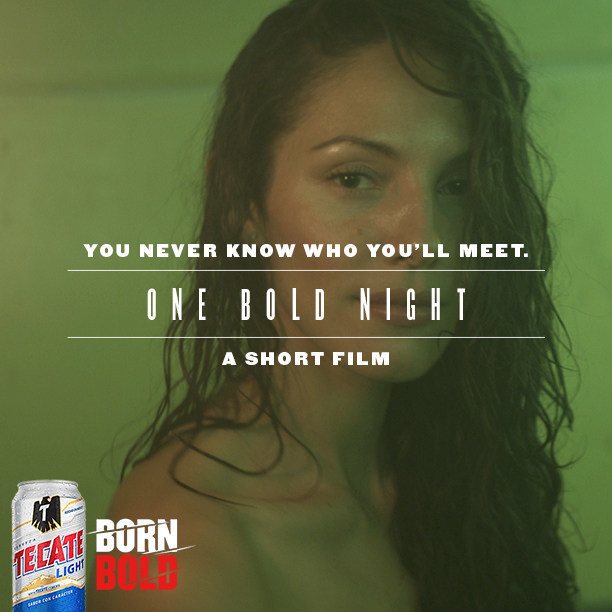 The decision to go bold, and give the film extensions in YouTube plays into the brand’s overarching digital strategy to target its bi-cultural Hispanic consumer in the places they frequent most often. According to Nielsen’s Q2 2014’s Cross-Platform Report, one of these places is mobile technology, with Hispanics spending more time consuming digital video, downloading apps and surfing the web on their smartphones than the rest of the U.S.  This decision was further reinforced through a 2014 ComScore study, which found that Hispanics over index on technology.

Tecate Light Invites Consumers on “One Bold Night” with their Iconic Black Eagle added by Newsroom on June 23, 2015
View all posts by Newsroom →