By Newsroom on September 14, 2016Comments Off on The Coca-Cola Company Embarks on Cross-Country Storytelling Road Trip 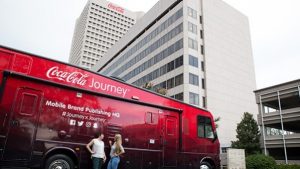 The Real Thing meets the real world as Coca-Cola Journey takes its storytelling mission on the road.

A mobile publishing project called JourneyxJourney is sending two Millennial brand journalists from the Coca-Cola Journey team on a cross-country road trip to discover, capture and amplify stories about the 130-year-old company’s deep ties to American culture. The three-week expedition kicks off today in Atlanta with an employee sendoff at Coke’s global headquarters and will make 20-plus stops across the US before concluding in Los Angeles. 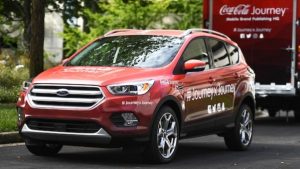 Launched in late 2012, Coca-Cola Journey is The Coca-Cola Company’s primary communication channel featuring the stories bubbling beneath the surface of its business, brands and people. Since its inception, the digital magazine has evolved into a global platform of media tools and real-time networks including a companion blog, more than 25 international editions, and a suite of social media channels with more than 3 million followers combined. Coca-Cola Journey is widely considered a brand publishing pioneer.

“JourneyxJourney represents the next natural step for the platform,” explains Doug Busk, global group director, social media and digital communications, The Coca-Cola Company. “It will allow us to get outside our digital box and into the real world where the best stories – and the people and communities behind them – live. The stories aren’t coming to us… we’re going to the stories. We see this as an exciting opportunity to create deeper connections with both our subjects and readers, and to further our mission to unbottle great Coca-Cola stories.”

The road trip marks the maiden voyage of the Coca-Cola Journey “Mobile Brand Publishing Unit”, a 40-ft. motorhome converted into a video production studio equipped with cameras, filming drones and editing equipment. An onboard crew will create everything from social videos to documentary-style long form films along the route. Two Journey staffers – Emily Bucherati and Meagan Priselac – will drive alongside in a 2017 Ford Escape, courtesy of Ford. They will create and co-create daily content with consumers, fans and employees – including Journey articles, blogs, social posts, photos and more. 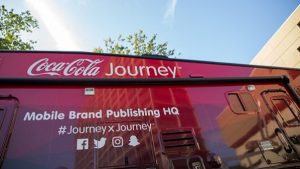 The project is a partnership between Coke’s global public affairs team and the company’s North American marketing arm. Each stop on the JourneyxJourney route was selected based on story potential and connection to Coke’s past, present and future.

“We’ll visit a mom-and-pop diner in Oklahoma that makes an amazing Coca-Cola cake, and we’ll meet concessionaires who serve hot dogs and Cokes at the stadium of the Chicago White Sox,” said Bucherati. “We’ll showcase the connection between Coke and classic Americana by line-dancing in Nashville, eating brisket in Texas and traveling Route 66. We’ll see Rock City in Chattanooga, but we’ll also visit the first Coca-Cola bottling plant while we’re in town.” 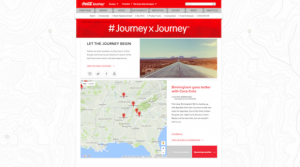 Content will be posted in real time to a dedicated landing page on Journey, which also features a dynamically updated route map, curated dashboard of #journeyxjourney social posts, a Spotify road trip playlist compiled by Coca-Cola employees, and a call-to-action for readers to share their road trip memories and story tips and for the JourneyxJourney team.

“Consumers, especially Millennials, want to know more about about Coca-Cola and the values and people behind this great company,” Priselac said. “We hope to pull back the curtain and bring to life the lesser-known, yet impactful stories around topics like our sustainability programs and connections to local communities, as well as discover untold Coca-Cola stories along the way.” 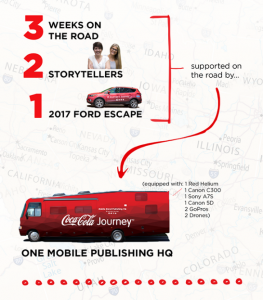 The trip will yield a mix of real-time and evergreen stories. “While JourneyxJourney is three weeks on the calendar, the content we create will have legs for an indefinite amount of time,” Busk said.

Not all JourneyxJourney content will be produced by the traveling team, however. Coca-Cola fans and employees are invited to join the storytelling caravan, both virtually and in person.

“Reader-generated engagement is a key component of this project, so we hope to see both extensions of the stories we’re telling and stories we’ve yet to tell come to life,” Busk said. “Our objective is two-fold – to package and edit content our intrepid reporters will uncover, but just as importantly, to elicit and encourage conversation and content we hope will manifest in and around the car.”

Fans can follow the road trip on Facebook, Twitter, Instagram and LinkedIn, and join the conversation via the #JourneyxJourney hashtag. The Journey team will partner closely with Coca-Cola North America to promote custom content on brand social channels, and also is using the roadtrip to make its debut on the popular Snapchat mobile app. 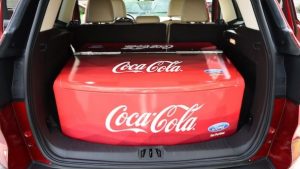 “Every social media platform today is a storytelling and story-sharing machine, so it made sense for us to put two digital natives from our team on the road to harvest share-worthy stories and deliver them through today’s most sophisticated tools and technologies,” Busk said. “Snapchat has evolved into one of today strongest real-time storytelling platforms that prizes not only authenticity but also currency due to the short lifespan of content on the channel. JourneyxJourney is the perfect launchpad for our Snapchat handle.”

Goals for the project include building awareness of the Coca-Cola Journey brand, especially among Millennials, as well as driving site traffic and engagement and expanding the reach of Journey’s social networks. 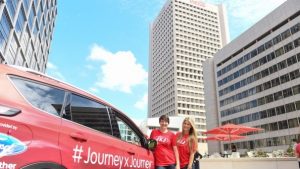 “And like everything else we do with Journey, if successful, we’ll want to return to the concept and export to other markets,” Bucherati said. “This is a grand experiment we hope to be able to remix and reapply in the future.”

But now, the highway – and the Coca-Cola stories it holds – await.

“Some of the greatest American stories are told from the road,” Busk said. “There’s something endearing and authentic about traveling the country and finding the untold stories of a 130-year-old company. And we couldn’t have a better partner than Ford – an iconic American automaker with a rich story of its own – joining us on this journey.”

Priselac added, “When you take a road trip, you think of having an ice-cold Coke in one hand and your other on the steering wheel of a classic American car like a Ford Escape. It’s a natural fit.”

The Coca-Cola Company Embarks on Cross-Country Storytelling Road Trip added by Newsroom on September 14, 2016
View all posts by Newsroom →