By Newsroom on June 19, 2018Comments Off on The UN’s World Food Program Turns to Global Cinemas to Help End Hunger

The United Nations’ World Food Program kicked off a global campaign June 19 aimed at reaching the public through a 60-second cinema spot that will air in more than 25 countries starting in September.

“There are 815 million people worldwide who will go to bed hungry tonight – who are starving, on the edge of dying,” said Corinne Woods, chief marketing officer of the WFP. “We have to reach those people and we need $9 billion a year to reach them.” 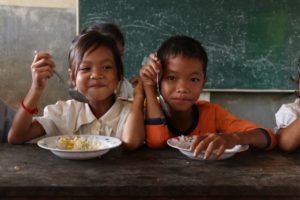 She added that 98 percent of the WFP’s funding is from the government. “We need consumers. We need the public to know us,” said Woods, which is where the idea came from for a global cinema campaign.

The “Feed Our Future” ad, which was written and directed by Sir John Hegarty’s The Garage Soho, premiered at the Cannes Lions Festival of Creativity in partnership with SAWA, the Global Cinema Advertising Association.

Rather than featuring images of starving children, the ad focuses on “the potential we lose when a child dies or is malnourished,” said Woods. When she was in Congo recently, Woods said a 12-year-old boy, who looked six due to undernourishment, told her that he wants to be a footballer someday. “He’s not going to be a footballer, and his friend isn’t going to be a doctor – we’re losing potential,” she said.

Hegarty said that pulling at the heartstrings works, but “we’re overwhelmed by that appeal” and the WFP wanted to go in a different direction and bring everybody into this global problem. “This affects us all – it’s not just the poor children in Africa,” he said. 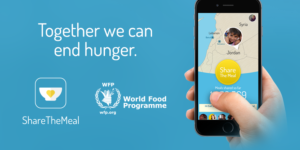 He added that he got involved in the initiative because he can apply his creative skills and expertise to such an important cause. “There’s no shame in selling jeans and cars and things like that, but on the other hand, it’s powerful to be able to help solve a problem like this and I think the advertising industry is in a unique position to assist all kinds of organizations that need this kind of help and commitment,” said Hegarty.

In addition to the spot, which was directed by filmmaker Lynne Ramsay and produced by award-winning production company Somesuch & Co., the WFP has launched a mobile app called ShareTheMeal. The app, which is available to download today, allows consumers to donate money in a simple way. Woods said that 40 cents feeds a child for a day.

The app is also aimed at being a social network of sorts and connecting people globally by allowing donators to see reports about what people are buying with the money each month and seeing stories from their towns and refugee camps, such as weddings.

Woods has a challenge for everyone at “Team Cannes” this year: “We’re challenging the Cannes community, who is all drinking rose, to do the right thing and download the app today. No person should leave Cannes without doing this.”

The UN’s World Food Program Turns to Global Cinemas to Help End Hunger added by Newsroom on June 19, 2018
View all posts by Newsroom →