The Vimtoad is Back as Vimto Champions Convenience

By Newsroom on June 8, 2017Comments Off on The Vimtoad is Back as Vimto Champions Convenience 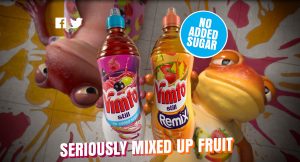 As Vimto continues to outperform the market, growing at 6.8% vs. 1.4% for the category, the popular brand has announced a nine-month distribution drive for its hugely popular RTD range. Vimto is already the fastest growing brand in this sector, seeing a +23% sales increase in RTD’s year on year.  Vimto brand value is at an all-time high – it’s now worth a staggering £73.4 million and has a household penetration of 25%.

As well as the distribution drive, which will focus on convenience retailers in the North West, Midlands and London, a media campaign will run in cinemas and On Demand, as well as across digital and social platforms. The Vimtoad character is returning with his orange friend, MixToad as the brand gets behind its original and Remix variants, which have both seen incredible growth over the past year.

In the advert, aimed at Vimto’s teen audience, the two battle it out in a seriously mixed up fruit battle. This year’s ‘toad off’ campaign is expected to have over 15.4million impressions. In addition, a Vimtoad themed suite of POS will be available to retailers for them to engage and excite shoppers at the point of purchase.

Ed Jones, Senior Customer Marketing Manager for Vimto says: “Convenience is becoming an ever bigger focus for us. Vimto Remix, which is the most successful NPD launch from the Vimto brand, has been driven by the convenience and wholesale channels – and it’s a strategy that’s working for us. Having only launched a year ago, the brand is already worth £4.3m.”

The Vimtoad is Back as Vimto Champions Convenience added by Newsroom on June 8, 2017
View all posts by Newsroom →