Tiempo BBDO is once again the agency chosen to set up the new global Lay’s campaign 2016, which will be seen in many countries around the world. The agency created the strategic approach together with the client and did the creative work for the campaign, including a television commercial and a range of online content.

The television commercial (above) was shot in September 2015, in Barcelona and Madremanya, a small village in the province of Girona, became a town in Tuscany for two days. The best footballer in the world, Leo Messi, once again stars in the piece. 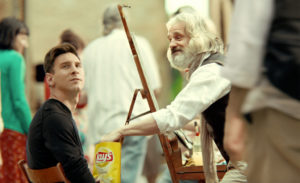 The idea of the campaign once again revolves around how irresistible Lay’s are. In the ad, Messi is strolling through a small village in Italy when a street painter, seeing him eating Lay’s, offers to paint his portrait. The painter takes advantage of the situation to eat the Lay’s while Leo Messi is posing for the portrait. The twist comes at the end when the painter shows the finished canvas with a picture of a bag of Lay’s and Messi realises the artist has eaten all his crisps.

In parallel to this some audio-visual pieces have been produced to complement the campaign, for distribution on social networks. They’re short, humorous pieces associated with Messi and the brand.
Anorak was the production company commissioned to shoot the ad, under the Australian director Bruce Hunt, who has also worked with Lay’s before.

The music for the ad is an adaptation of the song ‘Mambo Italiano’ by Rosemary Clooney. The music was made by Konga Music.