By Newsroom on January 9, 2018Comments Off on Unilever Under Fire Over Gaytime Ice Cream in Indonesia 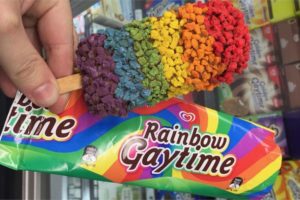 sought to put out a social-media fire in Indonesia over its Golden Gaytime ice cream brand, by explaining that the brand is not even sold in the country.

The company issued a statement on January 8, in response to fervent local social-media outcry protesting Golden Gaytime, sold by subsidiary Wall’s, for its name and design, which appear to promote LGBT rights—a tinderbox issue in mostly Muslim Indonesia, where homophobia is a significant problem.

In its short statement, Unilever Indonesia clarified that “the Gaytime ice cream mentioned in the social media are not the products of Wall’s Indonesia.” It went on to say the company has been in Indonesia for 84 years and that Unilever “respect and uphold the cultural and religious values and norms” of the country.

Unilever went further to point out that its Wall’s brand is halal certified in Indonesia, and won an award for its efforts in this area.

Golden Gaytime was first released in Australia in 1959, and has kept its name despite the change in connotation of the word ‘gay’. In recent years, as with the rainbow edition, it has embraced the modern use of the word.

Unilever Under Fire Over Gaytime Ice Cream in Indonesia added by Newsroom on January 9, 2018
View all posts by Newsroom →