By Newsroom on June 24, 2014Comments Off on US Football Star Eddie Johnson Helps Search for the Ultimate Bacardí Untameable Fan

Bacardí rum announces its Untameable Fan contest, whereby one worthy fan and a guest will win a trip to one of the countries whose team is playing in the final soccer match this summer.

To prove they deserve the Bacardí Untameable Fan title, football buffs in the United States can share photos or videos of a prized possession they would be willing to sacrifice here for a chance to experience the final match surrounded by the most untameable fans in the world.

Bacardí rum tapped Eddie Johnson, 2012 MLS Comeback Player of the Year, to share what it takes to be a Bacardí Untameable Fan. Johnson, one of the youngest players to sign with Major League Soccer, knows first-hand about making sacrifices to pursue a passion. 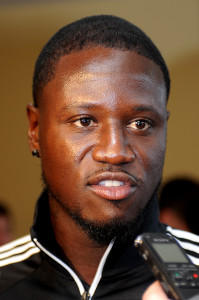 “I’m very passionate about the game and that has certainly helped to drive my success, but when I’m on the field, it’s the fans who fuel my performance,” said Johnson. “In my experience, there are fans, and then there are untameable fans—the ones who take the game to a whole new level with their passion and enthusiasm.”

It is an uncompromised passion that has been a driving force for Bacardí as well. For more than 150 years, the brand has fearlessly honored the legacy of its founders whose irrepressible spirit made Bacardí rum what it is today. Through earthquakes, distillery fires, Prohibition, revolution, exile and more, the Bacardí brand and family’s story can be summed up with one word: “Untameable.”

Bacardí Untameable Fan is an extension of the brand’s ongoing global campaign “Bacardí Untameable Since 1862,” which comes to life nationally through television, digital and print ads that embody the true grit and determination that sustained the rum brand and helped it thrive.

The Bacardí Untameable Fan contest winner will be announced July 7, 2014 on the contest webpage, www.bacardiuntameablefan.com.

US Football Star Eddie Johnson Helps Search for the Ultimate Bacardí Untameable Fan added by Newsroom on June 24, 2014
View all posts by Newsroom →