By Newsroom on March 19, 2018Comments Off on V Energy Receives the Hollywood Treatment in Latest ‘Deadpool 2’ Campaign

V Energy‘s “massive hit that improves you a bit” campaign has received the Hollywood treatment via TKT Sydney, with the latest iteration of the Aussie campaign starring Marvel’s anti-hero Deadpool. 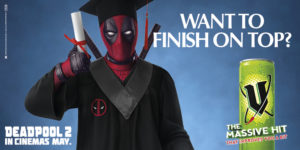 new campaign kicks off today in partnership with 20th Century Fox for the launch of Deadpool 2.

The partnership builds on V Energy and Fox’s longstanding relationship and is set to be the biggest yet with a $4.5M national campaign across OOH and digital, along with large investment in-store, including an on-pack promotion and 12.5M limited edition packs, including a bespoke Deadpool V flavour. 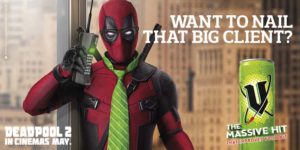 digital & OOH campaign features Deadpool as V’s spokesperson in various guises flaunting V Energy as a solution to your everyday energy-related needs. Big or small, serious or flippant, there’s nothing a V can’t make you a bit better at.

Chris Henbrey, Brand Manager on V said: “Gaining the attention of the 18-24 key target is an increasingly problematic thing for brands to do. Partnering with a movie character that they love is a great way to get noticed. The trick is finding the right balance between movie character and brand, which I think we’ve done.” 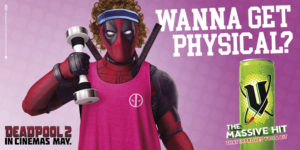 Kate Nicholls, Head of Partnerships, 20th Century Fox added: “We are thrilled to be working with the V Energy brand to deliver an innovative partnership that celebrates Deadpool 2. TKT have embraced the virtues of Marvel Comics’ sexiest fourth-wall-breaking anti-hero and the V Energy campaign timing allows us to tease the new film and excite fans without revealing too much.”

Deadpool 2 will be in Australian cinemas on May 17, with the campaign hitting OOH, social media and digital from March 19.

V Energy Receives the Hollywood Treatment in Latest ‘Deadpool 2’ Campaign added by Newsroom on March 19, 2018
View all posts by Newsroom →