By Newsroom on November 27, 2018Comments Off on VB Calls on Aussies to Re-Create their Iconic Anthem for New 50th Anniversary Campaign 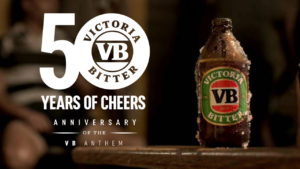 Victoria Bitter is asking Australians to re-create the iconic ad that has echoed throughout pubs and lounge rooms for decades, with the best submissions to be used in a new campaign.

In 1968, the first ads featuring the classic line “a hard-earned thirst needs a big cold beer” aired. Since then, drovers, tradies and sportsmen have starred in various versions to create one of the most recognisable ads in Australian history.

Now, it’s the public’s turn. From November 27, VB is calling upon people to submit their own rendition of the VB anthem and the unmistakable tune behind it. Entries can be submitted via Facebook, Instagram or Twitter using the #VB50yearsofcheers hashtag.

The best will be compiled to create a new ad featuring everyday Australians that will be rolled out digitally and most likely seen by millions over summer.

VB is calling on rockers and rappers, singers and soloists, or just anyone who wants to have a crack, to enter. However you want to bring it to life, wherever you want to sing, speak or hum it, we want you to submit it.

Hugh Jellie, senior marketing and sponsorship manager, VB said: “This is the ad that made VB the Australian icon it is today. But after half a century of the tune done our way, it’s now time to hear VB drinkers do it their way. Whether it’s whistling on one of our amazing beaches, tapping your finger on the kitchen counter or singing to your partner in front of the Opera House, we want to see it and feature it in our new ad.”

The hunt to find a new rendition was officially launched at #VB50yearsofcheers celebrations in Melbourne, which saw Horns of Leroy Brass Band, Rock Group Diet and immaculate opera singer Maddie Featherby perform their take on the classic Aussie anthem.

Entries close December 19 and the new ad will be revealed shortly after.

VB Calls on Aussies to Re-Create their Iconic Anthem for New 50th Anniversary Campaign added by Newsroom on November 27, 2018
View all posts by Newsroom →