By Newsroom on August 1, 2018Comments Off on Vegemite Launches First New Push in 6-Years with ‘Tastes Like Australia’ Ad Blitz

What do Pauline Hanson, The Big Prawn and Rebel Wilson have in common? Well – more than just being Australian. They all give you a taste of what Australianism really is; a little weird, a whole lot wonderful, and ultimately truly unique… much like the iconic and unmistakable taste of Vegemite. 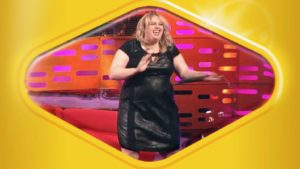 Vegemite has become a symbol of our national identity and in a new campaign, celebrates Australia’s diversity and unity through a mega-mix of iconic faces and moments. It playfully highlights all the weird and wonderful moments that have defined Australia through history.

Today the iconic brand launches its new ‘Tastes Like Australia’ campaign – a first in six years. The campaign is a clear departure for the Vegemite brand and is the work of creative agency, Thinkerbell, who won the Bega account last year.

The ‘Tastes Like Australia’ campaign celebrates and embraces every part of Australia. An aim of the creative is to start a national conversation reflecting on what Australia means and tastes like. 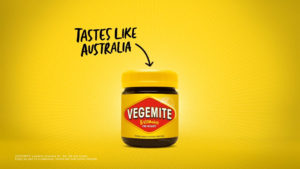 Adam Ferrier, co-founder, Chief Thinker and Consumer Psychologist at Thinkerbell believes the creative behind the campaign will prompt Aussies to think about what Australia means to them. Does it taste like Pauline Hanson? An Aussie winning the most prestigious international cycling race? Crocodiles, sunny beaches, 12 (8) apostles or Skippy hitting the drums?

“The ‘Tastes Like Australia’ campaign is topical, thought provoking and aims to promote a discussion about national pride, difference and unity. And while the intent of the campaign is clear, a true celebration and embrace of our unique nation and Vegemite, there is no doubt the interpretation of the creative elements, could spark some heated discussions. We live in a place full of beauty and prosper but when you think about it – it’s pretty quirky: supersized prawns and bananas, an intriguing and dynamic political environment, and the love of an underdog. These are all uniquely Australian… just like Vegemite.” 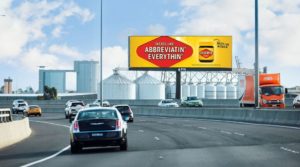 Jim Ingram, co-founder ECD of Thinkerbell said: “It’s really about creating a parallel of distinct, memorable and iconic moments throughout Australian history against the backdrop of Vegemite. We hope the ad will elevate a discussion about Australianism and to be honest – it is all a bit of fun. When we became custodians of the iconic Vegemite brand, we knew we needed to handle it with care – along with the entire Bega portfolio. Through ‘Tastes Like Australia’, we hope we’ve done Vegemite and Australians proud by representing everything that makes up this great country!” 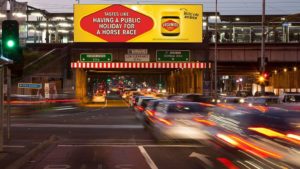 The campaign will launch with a 60 and 30-second edit and will feature across multiple platforms including its own interactive microsite. The media mix spans traditional TV, cinema and outdoor as well as digital to ensure it reaches all Australians. The ‘Tastes Like Australia’ site also allows users to watch the commercial and actually navigate through each clip, talent and location to learn about its place in history. 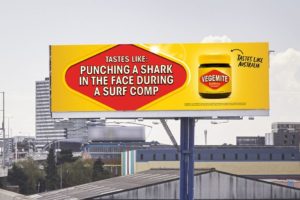 Vegemite’s own history was redefined last year, as it was bought back under Australian ownership by Bega Cheese Limited; a moment, the brand continues to celebrate. This milestone, the business believes, created a licence to truly talk to Vegemite alongside other great Australian moments.

“For nearly a century Vegemite has been a part of Australia – whether it be spread on toast, in a sandwich, sent off to troops or simply within arm’s reach in the pantry. Vegemite is uniquely Aussie and that’s one of the things we absolutely love about it,” says Vegemite marketing manager Matt Gray.

“However, there’s a huge opportunity to spread the love of Vegemite wider, with over a third of Australians now born overseas. It’s important we recognise that Australia is a young, diverse and multi-cultured country with a significant proportion of Aussies not having grown up on the iconic spread. This insight alone paves the way for new thinking in marketing Vegemite and our other brands. The changing face of Australia is part of what makes our nation great, and we want to be in the homes of all Aussies, new and old. Through this campaign, we want to cement our place back on Australian kitchen tables and ensure we remain as iconic as ever. We see it as our responsibility to create new connections and moments in time between Vegemite, and all members of this great nation!”

Vegemite over the course of the last 95 years have created many iconic and memorable commercials, none more so than the advertisement with the jingle, ‘Happy Little Vegemites’. While many Australians didn’t grow up knowing this jingle these days, the inclusion of the iconic tune a nod to the brands heritage and a great reminder of the role Vegemite has played in the homes of Aussies for generations.

Gray added: “It’s relevant, it’s fun and highly distinctive. But more than anything, it’s ultimately a toast to this great nation and a spread that well and truly deserves its place in the pantry as a true, Australian icon.”

The ‘Taste Like Australia’ campaign goes live to Vegemite Facebook Fans on August 1, to air in cinemas August 2 and will be broadcast on television for the first time, Sunday evening: August 5.

Vegemite Launches First New Push in 6-Years with ‘Tastes Like Australia’ Ad Blitz added by Newsroom on August 1, 2018
View all posts by Newsroom →