By Newsroom on October 13, 2016Comments Off on Verum Captures ‘Joygurt’ Feeling in New Campaign by Saatchi & Saatchi Stockholm

Verum, Sweden’s number one health yoghurt brand, and Saatchi & Saatchi Stockholm, have released the first film in their latest advertising campaign which sets out to demonstrate the simplicity of feeling good.

The TVC, which launched in October, is designed to capture that ‘Joygurt’ feeling that comes with enjoying their healthy yoghurts through the eyes of a skateboard loving pooch, Biuf, who can be seen cruising without a care in the world around his neighbourhood block. Focusing on the simplicity of happiness, the campaign marks a move towards a more emotional communication strategy for the brand. 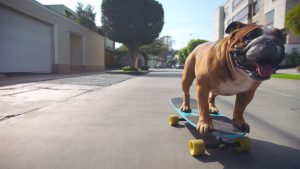 The 50” film was produced by Folke Film and directed by Marcus Söderlund and will run on TV and online channels for the next three weeks. The visuals of Biuf and his skater journey were authentically created without CGI or special effects.

Gustav Egerstedt, Executive Creative Director of Saatchi & Saatchi Stockholm said, “It’s exciting for us to take Verum’s communication towards a more emotionally driven direction, using something both simple and genuine.”