By Newsroom on June 25, 2013Comments Off on Wrigley’s Skittles Brand Teams Up With Fruit Ninja Game 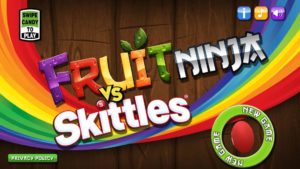 Skittles has teamed up with the greatest fruit-slicing game in the world and, this July, is set to entertain its fans with a new on-pack promotion, telling avid gamers how to download new Fruit Ninja vs. Skittles to their Smartphone for free.

The new and exclusive game, which launches in the UK next month, will be supported by a £2m through-the-line marketing investment, including bespoke OOH advertising, in-store activation and strong social media engagement.

The on-pack promotion will be available across Skittles 55g and 174g Fruit, Sours and Confused packs and represents the brand’s most exciting link up of all time.

Highly addictive, global phenomenon Fruit Ninja already has a loyal following of 400 million users, with the aim of the game being to slice fruit, or in this case Skittles, with a blade controlled via a touch pad.

This latest addition to the Fruit Ninja family builds on the existing game with exciting new and exclusive content created just for Skittles.

Skittles fans want to be entertained and our new game not only delivers hours of fun, but also taps into the growing trend for on-the-go gaming, which is now the most popular activity carried out on a mobile phone. We understand our fans and with them spending up to 16 hours a week gaming on their phones, this is the perfect way to engage with them and simultaneously drive sales.

The new Skittles branded version of the popular game will be available to anyone with access to a packet of Skittles and a Smartphone and can be downloaded by following instructions on pack.

In addition to the on-pack mechanic, shoppers can also download the game by scanning a QR code on special point of sale material in selected stores.

Wrigley’s Skittles Brand Teams Up With Fruit Ninja Game added by Newsroom on June 25, 2013
View all posts by Newsroom →