By Newsroom on March 26, 2015Comments Off on WWE’s Roman Reigns Wrestles with Hunger Just Days Before the Biggest Match of His Career

WWE fans are anticipating a spectacular show of strength and determination from Roman Reigns during the main event at WWE’s pop culture extravaganza, WrestleMania 31, on March 29 – but what if he’s running on empty? Turns out, there’s not a lot of fight in Reigns when hunger strikes.

Reigns gave the world a glimpse of a slightly softer side, expressing a little uncertainty before the biggest match of his life, and wondering why he and his opponent can’t “just get along” days before they’re set to face-off in a video now online on the official Snickers YouTube page. Roman shared his hunger alter-ego in support of the Snickers Brand 2015 “Who Are You?” Contest – proving that anything can happen when you grapple with hunger.

“The Snickers campaign is based on the undeniable truth that we’re just not ourselves when we’re hungry,” said Reigns. “I had a lot of fun sharing my hunger alter-ego with fans, and I know my opponent is hoping to get a taste of that side on Sunday at WrestleMania… but I promise I’ll be fueled-up and ready to go.”

After five years of proving “You’re Not You When You’re Hungry” with its award-winning global ad campaign, the Snickers Brand contest flips the concept, inviting fans to share who they are when they’re hungry for a chance to win $50,000, and “take over” the YouTube home page for a day. 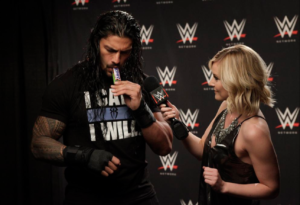 “Roman, like all WWE Superstars, has a larger-than-life personality, so he was the perfect partner to showcase the dramatic effects of hunger,” said Allison Miazga-Bedrick, Director, Snickers Brand. “Hopefully millions of fans will follow Roman’s lead and share their hunger alter-egos with us as part of our unique contest.”

In addition, fans can check out the Snickers “Who Are You When You’re Hungry?” meme generator and share their hungry identity with the world using #eatasnickers.

Consumers are invited to vote for their favorites online from among 10 finalists May 11 through July 15, 2015. The winning content will be showcased as a Banner Ad on the YouTube homepage for a day, and its creator will receive $50,000.

WWE’s Roman Reigns Wrestles with Hunger Just Days Before the Biggest Match of His Career added by Newsroom on March 26, 2015
View all posts by Newsroom →