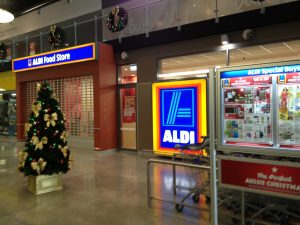 Supermarket chain Aldi has confirmed a new minimum price per litre for all of the milk sold in its UK stores.

From Monday Aldi will pay 28p per litre to the three dairies it buys milk from, Arla, Muller Wiseman and Graham’s Family Dairy.

The move comes after struggling dairy farmers mounted protests from clearing supermarket shelves of milk to herding cattle through supermarket stores to draw attention to the rock-bottom prices they’re being paid for milk.

Tony Baines, head of buying for Aldi, said the price increase was “the latest example of our support for the sector” adding that it would continue discussion with the National Farmers Union to discuss cheese and other dairy products.

Rob Harrison, chairman of the National Farmers Union, added: “Aldi has shown that it supports the farming community and has developed sustainable agreements with its liquid milk suppliers, in addition to its existing strong commitments to the farmers of Britain in fresh meat and produce.”

Morrisons introduced new brand ‘Milk for Farmers’ which sees an extra 10p per litre passed back to farmers. The supermarket has also said it will pay it’s dairies – Dairy Crest and Arla – at least 26p for processed fresh milk later this month and throughout the winter.

Walmart-owned Asda has increased the price it pays for milk to 28p per litre, promising the cost to consumers will be unaffected. Lidl has also raised the price it will pay to suppliers. However, farmers won’t necessarily be better off because its up to the dairies how much they decide to pass on.

A spokesman for Muller Wiseman said it welcomed the move and would “ensure that it is properly reflected in our farmer proposition.”

Co-operative owned Arla should see any profits shared by its owner farms.