By Newsroom on March 16, 2018Comments Off on An Old Timer Pines for Powerade in W+K’s Fun March Madness Flashback

Powerade isn’t just a sports drink. It turns an athlete into a magically unstoppable force of nature, says a tongue-in-cheek new ad from Wieden + Kennedy Portland.

The :30 opens on an old timer working the register at a convenience store. He’s about to ring up a bottle of blue Powerade sitting on the counter. But the youngster who’s buying it—and holding a basketball—isn’t getting away without a dose of nostalgic wisdom. 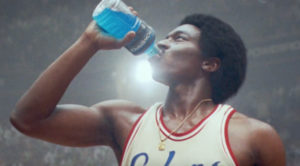 “Man,” says the silver-haired clerk, gazing dreamily at the neon beverage. “If I’d had this kind of power back in my day … my crossover would’ve been something else. I would’ve broke everybody’s ankles.”

When he says everybody — he means it.

Cue a flashback fantasy to a ’70s court, where a younger version of himself is driving toward the basket. All nearby humans—players on the opposing team, the referee, even the man selling peanuts in the bleachers—inexplicably collapse as he shreds his way down the court.

His crossover would’ve been “so crazy,” in fact, that “if you recorded it [and] watched it two weeks later? Broke ankles,” he says. Cut back to the present, and he’s winding down. “Man, that is some kind of power.”

It’s an entertaining twist on a classic trope, a close cousin to the finger-wagging “You kids these days don’t know how good you’ve got it.” The production nails the details, down to a background soundtrack that instantly evokes Donna Summer’s iconic 1977 disco track “I Feel Love” by mimicking the bass line in another key. Incidentally, that’s the same year VHS tapes first appeared in the U.S. 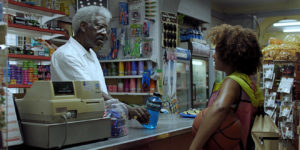 And in the last scene, the actor playing the old timer perfectly snaps his head up from the Powerade to warn the youngster: “Careful now.”

Titled, naturally, “Ankles,” it’s part of a campaign called “That’s Some Kind of Power,” timed to launch with March Madness this past Tuesday—Powerade is a key sponsor of the NCAA.

The Coca-Cola-owned brand wanted to differentiate itself in an increasingly competitive sports drink category, Alex Ames, senior integrated marketing communications manager at Powerade, said in a statement. “We’re excited to bring a bit of humor and fun to a category that has become overly serious. At the end of the day, sports should be fun.”

To that end, even the new ad’s YouTube description offers a bit of its own advice—funnier (and, were the conceit true, far less useful) after seeing the spot: “You might wanna take a seat before you watch this.”

An Old Timer Pines for Powerade in W+K’s Fun March Madness Flashback added by Newsroom on March 16, 2018
View all posts by Newsroom →