By Newsroom on May 15, 2013Comments Off on Antarctica Beer: Turning Beer into Train Tickets

Rio de Janeiro’s Carnival is always an outrageous and happy affair. People dress up and they drink and often they drive home—which is exactly what the main-sponsor of the event, Antarctica beer, hoped party-goers would not do. 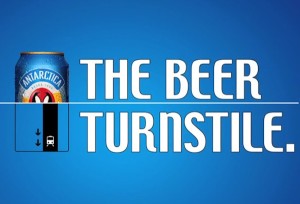 Working with Brazil’s Almap BBDO, they came up with a creative and socially responsible advertising concept called the ‘Beer Turnstile’.

The clever concept accompanied the potent message of ‘Don’t Drink and Drive’, by encouraging carnival attendees to arrive home safely via public transportation with the use the ‘Beer Turnstile’ at the metro station.

The metro turnstiles were re-vamped for the event and it accepted empty Antarctica beer cans as metro tickets. All a person had to do was scan the can and they were allowed to proceed to the train platforms—no cash was necessary.

Overall, the innovative turnstiles proved to be a huge success, as the number of drunk drivers caught after the Carnival dropped by 43%.

Antarctica Beer: Turning Beer into Train Tickets added by Newsroom on May 15, 2013
View all posts by Newsroom →