By Newsroom on June 19, 2014Comments Off on Bud Light Combines Soccer & Education to Celebrate the 2014 FIFA World Cup 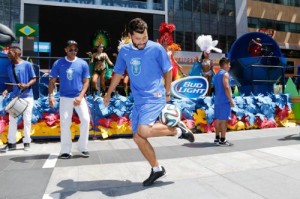 Bud Light is donating a university scholarship to the Hispanic Scholarship Fund (HSF,) the nation’s largest not-for-profit organization supporting Hispanic American higher education, for each goal scored during the 2014 FIFA World Cup up to $250,000. The company will also celebrate soccer passions in the United States with a spectacular FIFA World Cup viewing party infused with all the energy and enthusiasm of Brazil during Carnival.  Budweiser remains the official beer of the FIFA World Cup, but this marks the first time that Bud Light has been named an official partner of the global soccer tournament.

The donation is the latest example of Anheuser-Busch‘s longtime support of the Hispanic community. The company began supporting HSF in 1982 and has awarded more than $25 million – and 20,000 scholarships – to date. 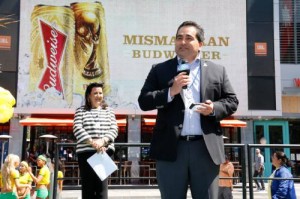 “This year’s scholarship application cycle was more competitive than ever. The winners represent the best and the brightest from an amazing pool of talent,” said Fidel A. Vargas, President & CEO, Hispanic Scholarship Fund.  “With Anheuser-Busch as a hands-on partner, we can look forward to increasing the number of scholarships we are able to offer qualified applicants, and the number of related services we provide to college-bound Latino students and their families.”

As part of Bud Light’s #UpForWhatever marketing efforts, a fully integrated Spanish-language campaign has been developed around Bud Light’s sponsorship of the FIFA World Cup.  The campaign will include TV, print, outdoor, interactive and point-of-sale elements. A national sweepstakes will give consumers the opportunity to attend a World Cup Finals Bud Light VIP Party in Las Vegas. To enter, U.S. consumers 21 years of age and older can text the word “BudLight” to 23377. 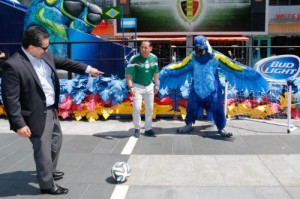 “Integrating our sponsorship with education is at the core of our company values – it’s a winning recipe for Latinos that aspire to hold a university degree,” said Miguel Nigrinis, Sr. Brand Manager for Bud Light. “Soccer fans also have an opportunity to be winners through a unique sweepstakes program that brings them closer to the action and their favorite team.”

Anheuser-Busch has been a FIFA World Cup partner since 1986. The 2014 FIFA World Cup is the company’s eighth consecutive tournament as a major event sponsor, underscoring the brand’s commitment to soccer. Budweiser also is an official sponsor of Major League Soccer and the U.S. Men’s National Team, while Bud Light serves as the official beer sponsor of the Mexican National Team.