By Newsroom on June 2, 2014Comments Off on Budweiser Unveils Experiential Campaigns For the 2014 FIFA World Cup 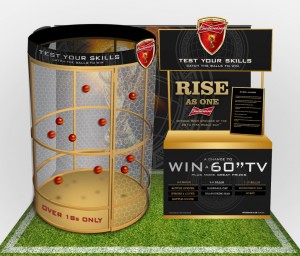 Budweiser, the official beer of the 2014 FIFA World Cup, has unveiled two experiential marketing initiatives to support its wider Rise As One FIFA World Cup campaign.

The first, aimed at bringing consumers closer to the FIFA World Cup, is the Budweiser Challenger which creates an in-store theatre experience.

The Budweiser Challenger will challenge consumers to collect as many branded balls as possible in an allotted time. The number of balls collected determines the level of prize awarded. Official 2014 FIFA World Cup branded gifts will be available exclusively through the activity as Budweiser looks to reward its loyal shoppers.

The first phase of the Budweiser Challenger was completed last month in Tesco stores throughout the UK, with Budweiser planning the second phase rollout of the activity during the 2014 FIFA World Cup itself. The second phase will be live in hundreds of Tesco and Sainsbury’s stores around the country until Thursday 13th July.

Thousands of lucky football fans visiting Tesco stores in recent weeks have already won prizes, with some even winning the dream prize of a 60” TV to enjoy FIFA World Cup games on.

In addition, a ‘Chilled Exchange Truck’ will sit at the front of selected ASDA and Sainsbury’s stores before the first England game of the FIFA World Cup on Saturday 14th June.

Brand ambassadors will be on-hand in stores to encourage consumers to swap their 18 x 440ml pack of beer for a chilled pack, ready to share at FIFA World Cup parties with their friends and family that evening. Thousands of cold packs will be delivered to shoppers across 40 stores throughout the UK.

“The experiential activity has been created to be innovative and engaging for consumers, while at the same time boosting sales. Experiential activity and live events are really important to Budweiser; they help create deeper relationships with consumers and showcase our World Cup campaign and the partnership we’ve had with the tournament since 1986. We believe that giving consumers an exciting experience will encourage them to engage with the brand, be it in-outlet or through our social media channels, whilst the Chilled Exchange improves the consumer experience by enabling them to have chilled beer instantly for their World Cup celebrations.”

Budweiser Unveils Experiential Campaigns For the 2014 FIFA World Cup added by Newsroom on June 2, 2014
View all posts by Newsroom →