By Newsroom on May 4, 2016Comments Off on Carlsberg Rewards Kind Passengers with Tickets to Euro 2016

Chris Kamara, the former footballer and Sky Sports pundit, dresses in disguise and rewards unsuspecting Tube travellers in London with football match tickets in a new Carlsberg campaign ahead of Euro 2016.

Created by Fold7, the film shows Kamara dressing up as a well-dressed older gentleman, with a beard and walking stick, and walking around the London Underground followed by a hidden camera.

When members of the public offer their seat to him, he reveals that he is in disguise and rewards their kindness with tickets to a match at the European Football Championships, which kicks off in France in June. 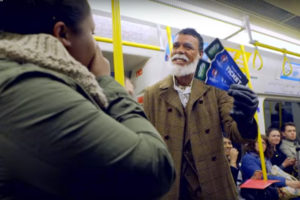 The tagline is “If Carlsberg did substitutions”, a play on substitutions which take place in a football match.

The “your seat for Euro seat” film was written and art directed by Fold7’s John Yorke and was directed by Chris Faith through Firecracker Films.

The film launched online and will be followed by outdoor and further social media activations between now and mid-June, when the football tournament starts. OMD is handling the media planning and buying.

Paul Morris, the brand and sponsorship activation manager at Carlsberg, said: “As the official beer of Uefa Euro 2016 and the England team, we’re delighted to work with Kammy and launch our campaign by rewarding members of the public willing to show their generosity.”

Carlsberg Rewards Kind Passengers with Tickets to Euro 2016 added by Newsroom on May 4, 2016
View all posts by Newsroom →