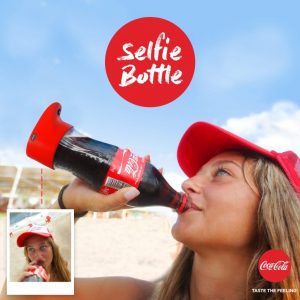 Coca-Cola has set its sights on winning over social media users after unveiling a custom built ‘selfie bottle’ which will take your pic whilst glugging down the fizzy drink.

Devised by Gefen Team for the Coca-Cola Summer Love campaign, Israel’s largest outdoor brand event, the resulting selfies can be shared on Snapchat, Facebook and Instagram.

The snappy design arose after its makers spied a gap in the market for novelty drinks.

In a statement Gefen said: “users tag themselves and their friends in photos on Coca-Cola’s social media assets. It really does the trick and makes the partygoers more present and active during the event, knowing they can share their special moments just by drinking.”

Fitted with an in-built camera at its base, the gimmicky product comes with a sensor to detect when it experiences a 70-degree drinking tilt, at which point the camera fires up to take a snap of its owner mid-drink.

Gefen have a long association with Coca-Cola, masterminding a number of stunts including a ‘social robot’ to give teenagers the chance to remotely attend the festival.