By Newsroom on December 5, 2013Comments Off on Coca-Cola Launches Campaign to Help Designated Drivers Stay Away From Alcohol 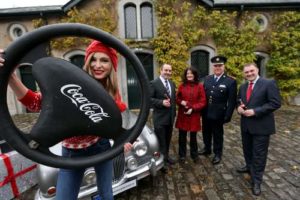 Over one million people admit that they drink drive once a week, according to figures released to mark the launch of this year’s ‘Designated Driver’ Christmas campaign by Coca‑Cola. One in seven drivers confessed to occasionally getting behind the wheel thinking that they had had  too much to drink – although a fifth of people did say they are less likely to drink drive at Christmas than at other times of the year.

The survey also found that the vast majority of people are unaware that there are no official guidelines on the amount of alcohol that can legally be consumed before getting behind the wheel – just 5% of those questioned answered this correctly. On average, respondents thought that there was a suggested limit of 2.3 units of alcohol that you could drink and still be safe to drive; in fact, current Government advice is to avoid alcohol if you are driving, as the legal limit depends on a range of factors, including age, weight, gender, metabolism and what you’ve eaten recently.

This year marks the sixth year that Coca‑Cola has run the Designated Driver campaign, in partnership with the Department for Transport’s THINK! road safety campaign, which lets designated drivers enjoy a “buy one, get one free” offer on Coca‑Cola, Diet Coke and Coke Zero as they celebrate the festive period in local pubs and bars. 60% of respondents said that they sometimes act as the designated driver on a night out, but, despite there being no ‘safe’ limit, one in six still consume alcohol before driving friends and family home. 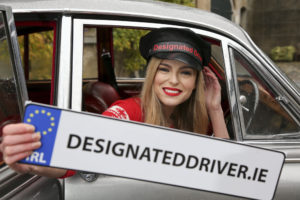 Jon Woods, General Manager, Coca‑Cola Great Britain and Ireland, said: “Designated drivers play a vital role in making sure the roads are safe for everyone. As we know that it’s safer not to drink at all before getting behind the wheel, Coca‑Cola is rewarding all designated drivers with free drinks so that they can celebrate the festive period and help to get their friends and family home safely.”

The survey also shows that people are less likely to drink drive than in the past, showing that the Government’s ‘THINK!’ campaigns are having an effect. Over half of those questioned said they were more likely to drive whilst knowingly over the limit than a decade ago, a number that increases to over three-quarters of people living in the countryside.

Road Safety Minister, Robert Goodwill, said: “Most people know that drinking and driving is wrong and don’t do it, but sadly there are some who still do. Anyone tempted to have a tipple at Christmas time before climbing behind the wheel should know they face some very serious consequences. Not only will you lose your licence but, if you rely on your car for work, you will potentially lose your job or wreck your chance of future employment.” 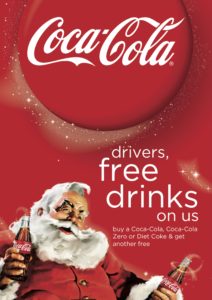 Brigid Simmonds, Chief Executive, British Beer and Pub Association said: “It’s great to see Coca‑Cola once again supporting this campaign. The Great British pub is at the heart of all our Christmas celebrations, so having a designated driver means people can get in the party spirit knowing they can have a safe journey home.”

The survey found that men are twice more likely than women (21% to 10%) to drink when the designated driver with the most common reasons for drink driving given as:

Coca-Cola Launches Campaign to Help Designated Drivers Stay Away From Alcohol added by Newsroom on December 5, 2013
View all posts by Newsroom →