By Newsroom on August 11, 2014Comments Off on Coca-Cola Reveals That Two-thirds of Brits Use Name They Were Given at Birth

Research released reveals that Great Britain is the most likely nation in Europe to opt for an abbreviation of our names or a nickname. Women are more likely to shorten their name (27%) whilst men prefer to opt for a nickname (15%, compared to 4% of women).

According to the findings, commissioned by Coca‑Cola as part of the Share a Coke campaign, we are most likely to be annoyed if someone misspells our name (41%) or shortens it without permission (16%). And a tenth of us would consider changing our name, because our name makes us feel awkward.

The survey also uncovered our obsession with celebrity culture – with over a quarter [24%] admitting to liking it when they share their name with someone famous, more so than other nations across Europe [European average: 18%]. Somewhat surprisingly, this trend is more common in men (29% vs 19% of women) with half of men aged 16 to 20 saying that they feel happiest about their name when they share it with someone famous.

The findings were part of a Europe-wide survey, commissioned by Coca‑Cola as part of its Share a Coke campaign, which is back for a second summer and is bigger than ever with more names available, including shortened or abbreviated versions and a selection of popular nicknames, for the first time.

In addition to the bottles of Coca‑Cola, Diet Coke and Coke Zero carrying over a thousand of Britain’s most popular names in stores across the country, this year, Coca‑Cola has launched a new exclusive online personalisation site where iconic glass Coca‑Cola bottles can be personalised with any of over 500,000 names.

“As we have removed our iconic name from Coca-Cola bottles for the second year running and replaced it with over a thousand more of Britain’s most popular names, we have been reminded about the sheer volume of conversation and excitement the Share a Coke campaign generates,” said Bobby Brittain, Marketing Strategy and Activation Manager at Coca-Cola Great Britain. 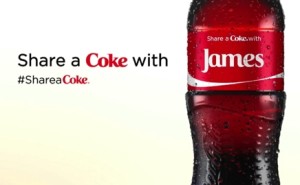 “What we have seen with the Share a Coke campaign is that everyone reacts differently to their name – some love theirs whilst others use shortened versions, nicknames or even change it completely. Above all, this research has confirmed that finding their name elsewhere makes people happy – and we therefore wanted to make sure everyone can get involved this summer by launching our online personalisation site and taking the Share a Coke campaign on tour around the UK.”

A Share a Coke personalisation tour is also making its way across the country, visiting selected town centres and Tesco stores.

Coca-Cola Reveals That Two-thirds of Brits Use Name They Were Given at Birth added by Newsroom on August 11, 2014
View all posts by Newsroom →