By Newsroom on April 1, 2016Comments Off on Coca-Cola’s Summer Campaign to Feature Lyrics on Packaging 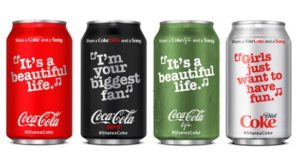 The hit “Share a Coke” campaign will sing a different tune this summer when it swaps out first names for song lyrics on packages of Coca-Cola, Diet Coke, Coke Zero and Coca-Cola Life.

“Share a Coke and a Song” also will feature lyrics from iconic and soon-to-be-iconicCoca-Cola and Diet Coke ads such as “I’d Like To Buy The World A Coke”, “Taste the Feeling” and “Just For The Taste Of It.” The complete list of lyrics featured on pack will be available here.

“Share a Coke and a Song” signals a major evolution for one of the company’s most successful US campaigns ever, now in its third year. “Share a Coke”, which originated in Australia in 2011 and has since rolled out in more than 70 countries, has helped Coke grow volume, revenue and share in its flagship market. 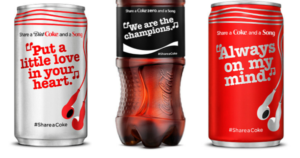 “We’re proud of the success of ‘Share a Coke’ over the last two years,” said Racquel Harris Mason, vice president, Coca-Cola/Coke Zero, Coca-Cola North America. “We’ve seen incredible enthusiasm from consumers who love the campaign’s personal touch, and we wanted to push ourselves to innovate and provide our fans with new experiences. Evolving the program to focus on lyrics creates an amazing opportunity for people to share special moments, sentiments and a Coca-Cola with people they care about.”

Joe Belliotti, head of global music marketing for Coca-Cola North America, creditsCoca-Cola China with successfully introducing the “Share a Coke and a Song” concept in 2014. “Music is a universal language,” he explained. “Lyrics can explain how we feel and what we want to say when we can’t find the words ourselves. The art of sharing music to express feelings for someone special goes back to creating mixtapes as a kid, which later evolved to mix CDs and now playlists… that behavior hasn’t changed. We wanted to find a way to take this idea to ‘Share a Coke’.” 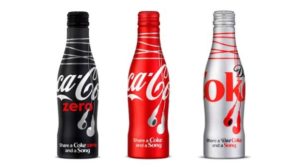 The team selected lyrics that capture a moment and reflect Coke’s brand values of optimism, refreshment and inclusion. Lyrics featured on the debut collection of “Share a Coke and a Song” capture the feeling of falling in love (“The Way You Love Me” and “You Belong With Me”) and celebrating victory (“All I Do is Win” and “We Are The Champions”) to moments of friendship (“Lean On Me”), to flirtation (“It’s Getting Hot in Herre”), sass (“We Never Go Out Of Style”), motivation (“I’m Your Biggest Fan”) and patriotism (“I’m Proud To Be An American” and “Sweet Land Of Liberty”).

“This isn’t about sharing a Coke and your favorite song… we didn’t focus on greatest hits or trending tracks,” Belliotti said. “We picked lyrics that inspire connection. Our goal was to create a list that appeals to diverse tastes, so every music fan can feel there’s at least one lyric that speaks to them. We ended up with a cross-section of universal songs that express a range of positive sentiments.” 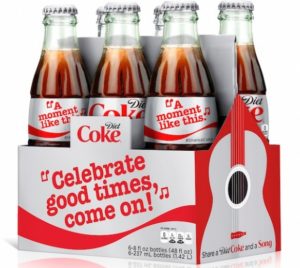 Lyrics used on Trademark Coke packages will reflect each variant’s personality and fanbase. “Share a Coke and Song” will also expand beyond its core set of 70-plus lyrics with location-specific and customer-centric songs in certain markets.

Fans can visit ShareaCoke.com starting April 18 to choose from a list of lyrics to customize bottles, and access digital images to share on social media and add to the #ShareaCoke Photo Gallery. The e-Commerce site will continue to sell 8-oz. glass bottles and six-packs of Coca-Cola customizable with names and inspiring messages. New this year, consumers can purchase customized Diet Coke and Coke Zero packaging.

“We’re creating an entirely new and different way to connect with music through our packaging,” Belliotti said. “It will be interesting to see this campaign trigger memories of songs fans may have forgotten as well as help them discover new favorites.” 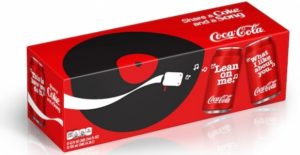 The program features a new social sharing opportunity that’s all about the music. Fans can use the Shazam mobile app to scan the lyric on specially marked “Share a Coke” 20-oz. bottles and signage, then record a digital lip-sync video to share on social media with the hashtag #ShareaCoke.

“Share a Coke and a Song” will be supported by a full advertising and marketing campaign – including music-themed TV and cinema ads, social and digital activations, and a summer-long experiential tour of major music events, beginning April 2 at the NCAA March Madness Music Festival in Houston. Multi-platinum international pop star Jason Derulo, one of the performers in Houston, will serve as a brand ambassador for the program.

“The timing is perfect,” Mason said. “Spring is here and we’re getting ready for summer, and the Coca-Cola Music concert in Houston enables us to launch the program with an amazing lineup of artists before thousands of fans.”

Coca-Cola’s Summer Campaign to Feature Lyrics on Packaging added by Newsroom on April 1, 2016
View all posts by Newsroom →