By Newsroom on September 1, 2015Comments Off on Coke Zero Takes Its Drinkable Advertising Campaign To ESPN

Coke Zero is building on its drinkable advertising campaign, which launched earlier this year during March Madness, with a new installment that sees the brand partnering with ESPN’s ‘College Game Day.’

Created by Ogilvy & Mather, the sampling campaign was created to give people a chance to try the zero-calorie drink through a number of different channels, including a billboard, since research has shown that many people claim to not like Coke Zero even without ever tasting it. 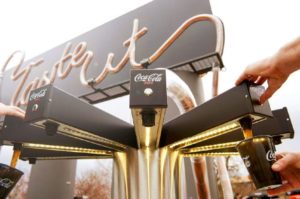 The new work will include iterations of the original campaign, such as ads that will prompt viewers to use Shazam. Those who use the music recognition app will see a Coke Zero pouring on TV pour into the glass on their smartphone and will then be delivered a coupon.

The brand is rolling out 10 football-themed spots, featuring ESPN personalities such as Lee Corso and Kirk Herbstreit.

At ESPN ‘Game Day’ sites, ‘drinkable jerseys’ will be handed out to select college students.

Social media elements will include ‘drinkable content’ with coupons related to ‘Game Day’ broadcasts. Coupons for a free bottle can be redeemed at retailers including Domino’s and 7-Eleven.

Coke Zero Takes Its Drinkable Advertising Campaign To ESPN added by Newsroom on September 1, 2015
View all posts by Newsroom →