By Newsroom on April 11, 2018Comments Off on Corona Launches Mid-Strength Ligera Beer in Australia with No TV Presence 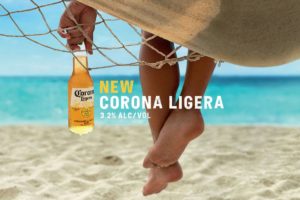 shift to ‘occasion’ alcohol consumption in Australian drinking culture has been labelled as the main driver behind the launch of Corona‘s new mid-strength beer, Ligera.

But you won’t see TV ads for Corona’s latest push, with the brand instead investing $4 million in media across OOH, digital and radio.

Griffiths says that for the launch the main objective was around “functional messages” which suits a different style of media strategy.

A national radio campaign is also part of the media strategy, accompanied by work through CUB’s digital channels, social media and influencer support.

The 3.2% version of Corona Extra is the brand’s first foray in the growing mid-strength category, which now accounts for more than 23% of the local beer market.

Griffiths says the brand’s decision to launch this as an Australian first was directly influenced by beer drinkers looking for a lighter alcohol alternative.

“More Australians are moderating their alcohol consumption and we really see that playing a role in the growth of the mid-strength beer segment,” she says. “Introducing this into a daytime ‘occasion’ really taps into this growth of the mid-strength market and the growing trend. Across the board in Australia, these ‘occasions’ and the way we consume beer is changing and this is a long-term category shift that we are participating a lot more in.”

Griffiths says these ‘occasions’ are a sign of a greater trend in Australian drinking habits and can take on various different forms, yet they all continue to link back to a surge in the popularity of “easier drinking style beers.”

“They are mixed gender social occasions, relaxed occasions, sometimes with family as well, skewing more into daytime occasions as well – so it’s a bit of a kind of cultural shift that is happening,” she says.

Mid-strength beer has also attributed to 49% more dollars nationally in category growth than full strength. Despite the fact, Griffiths says full strength is not dropping off dramatically, as the craft category has begun to boost the flagging sector.

“Craft plays at the other end of the spectrum, where a lot of the brands and styles of beer in that craft segment that are doing well are more the bitter and stronger flavour profile as well,” Griffiths says. “It really depends on what area of the market you want to look into. It’s not really a one-size-fits all situation when it comes to the drop-off.”

Corona Launches Mid-Strength Ligera Beer in Australia with No TV Presence added by Newsroom on April 11, 2018
View all posts by Newsroom →