By Newsroom on October 16, 2013Comments Off on Flora Pro-Activ Ads Banned For Unjustified Claims

Unilever has been banned from running two Flora ads that make unjustified claims about its Pro-Activ spread.

The complainants questioned whether the ads’ claim that “no other food lowers cholesterol more” could be substantiated.

Unilever submitted scientific studies that looked at the cholesterol-lowering properties of Flora Pro-Activ’s active ingredient plant sterols, and cited an approved claim that plant sterols can reduce cholesterol by a specific amount as part of a healthy lifestyle.

From that, Unilever argued there were no other foods or food ingredients on the market with significant, scientifically proven cholesterol-lowering effects, which it believed substantiated the “no other food lowers cholesterol more” claim. 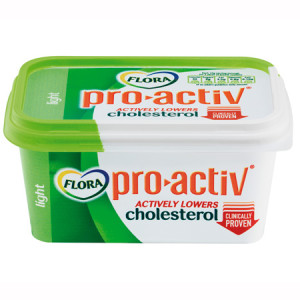 However, the ASA ruled “no other food lowers cholesterol more” was a specific heath claim and as it was not an authorised on the European Union register, its inclusion was a breach of the Broadcasting Code.

Moreover, the authorised claim for plant sterols was: “Plant sterols have been shown to lower/reduce blood cholesterol. High cholesterol is a risk factor in the development of coronary heart disease.”

The ads’ voiceover said the first part of the approved claim, “The plant sterols in Flora Pro-Activ are clinically proven to significantly lower cholesterol.” But omitted the second sentence.

Unilever argued it was well known and widely publicised that high cholesterol was a risk factor in the development of coronary heart disease and so the second sentence was superfluous based on the average consumer’s understanding.

Marketers can reword claims but only to make things easier to understand. The ASA ruled that omitting the second sentence did not aid the viewers’ understanding and altered the meaning of the claim and so was a breach of the code.

The ads must not be broadcast again.