By Newsroom on February 18, 2014Comments Off on From Pitch To Canvas: Pepsi Celebrates “The Art Of Football” 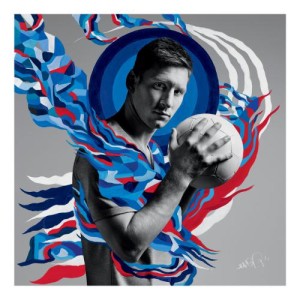 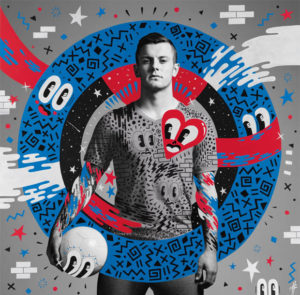 “The Art of Football” collaboration brings the raw energy of street art onto permanent fixtures of art which depict the players – who last month were announced as Pepsi’s global 2014 football ambassadors – in a clash of color, energy and movement to bring to life the beautiful game in a powerful, striking way.

To capture the athletes’ passion and excitement for the game, Pepsi commissioned lensmen Danny Clinch, whose distinctive, stark, black and white imagery of iconic subjects have earned global accolades. Clinch’s images were then enhanced by the six street artists, giving the photography an unbridled creative edge, urban rawness, bold color and sense of movement.

“Photographing some of the world’s most rhythmic and energetic individuals in a pure and simple way was a really exciting opportunity. Their individual personalities truly come alive in front of the camera,” said Clinch. “Coupled with the chance to collaborate with these amazing artists and have them integrate their art with mine – and mine with theirs – was so creative and inspiring. This project with Pepsi was a personal must do.” 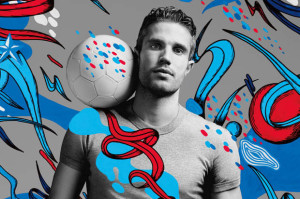 “Using street art over the stark black and white photos of these footballing icons creates a striking image,” said Lazarides. “This project provided these artists with the perfect opportunity to showcase their unique styles to a global audience – there’s a huge difference between something on the street which a passerby might glance at for 20-seconds and canvases of this magnitude that are permanent pieces of art. This collection manages to fuse the two styles in a very innovative and organic way.”

The innovative art collaboration is an important piece of the yearlong Pepsi football campaign.

Kristin Patrick, Pepsi Global Chief Marketing Officer, PepsiCo, commented: “There is an instinctive connection between artists and footballers in their energy, passion and creativity – whether it’s on a canvas or a pitch. We were passionate about creating a visual language that brought the energy and movement of football to life in powerful, unique pieces of art showcasing our players in the spirit of now. These are the hero images of this year’s global Pepsi football campaign and wonderfully capture our Live for Now brand ethos.”

In addition to “The Art of Football” collection, Pepsi will continue to bring fans exciting and engaging content throughout the year – from commemorative packaging featuring the global Pepsi players and a global television commercial to integrations with music, film, digital and interactive experiences – bringing them closer to the game they love.

From Pitch To Canvas: Pepsi Celebrates “The Art Of Football” added by Newsroom on February 18, 2014
View all posts by Newsroom →