By Newsroom on October 19, 2015Comments Off on Grey Raises a Glass to the Great British Boozer in Greene King Brewery Campaign

Leading cask ale brand Greene King IPA has launched To The Pub – a heartwarming and authentic advertising campaign that celebrates that great British institution, the pub. The film series comprises 50 pubs and 50 stories as seen through the lens of those who know the pub best – the landlords and their locals.

Pubs have always held a special place in the nation’s collective psyche. From the first ‘tabernae’ introduced by the Romans 2000 years ago came taverns, alehouses and inns – each a distinct institution with its own characteristics, patrons and place in society – before the evolution of the more familiar public house, or pub.

Pubs – in every form they have taken over the past two millennia – have always been more than just places to drink. A bastion of British culture, they represent the heart and focal point of a community; a place to meet, eat, drink, converse, laugh, do business in, escape to, and everything in between.

With recent stats showing that more people are drinking at home than in pubs for the first time on record, Grey London devised a campaign that celebrates not just these beloved venues but also the reason they play such a significant role in Britain’s culture and in the lives of people that frequent them.

To capture this spirit authentically, the agency worked with BAFTA award-winning docu-film maker, Paddy Wivell (best-known for Channel 4’s The Tribe) and production company, Just So, to give power to the publicans and allow them to tell their stories themselves. 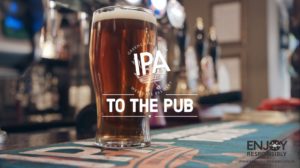 Working closely with Greene King IPA and a team of experienced researchers, Grey whittled down over 3000 pubs to 50 – including free houses and Greene King-owned pubs – and handed out cameras to every single publican, giving them the chance to become filmmakers alongside their locals.

The result was that each pub became an unscripted, organic story in itself, with an eclectic cast of characters, stories, traditions and goings-on, painting a charming portrait of British pubs and British people.

The diverse range of pubs that feature in the series include former Hell’s Angels haunt The Hawley Arms, the famed Camden venue best-known for being one-time local to the likes of Amy Winehouse, Pete Doherty and Kate Moss; and Nottingham’s Ye Olde Trip To Jerusalem, purported to be Britain’s oldest pub, dating back to 1189 AD.

Nils Leonard, Chairman & Chief Creative Officer, Grey London, says: “Pubs aren’t bricks and mortar, or beer and wine. Pubs are people. We wanted to create some work that showcased the beautiful rarity of our nations boozers, and at its best reminded us all why pubs have been at the centre of British culture for as long as they’ve existed.”

Chris Houlton, managing director, Greene King brewing and brands, said: “Our ‘To The Pub’ campaign highlights the important social role that pubs play in communities across Britain. By capturing just some of the real, intimate and funny moments that happen in pubs every day, filmed by the people who helped to make those moments happen, our campaign invests in bringing the pub and the value it has within the community to the attention of a national audience. It has been a monumental team effort to create this campaign and we could not be happier with the results.”

Paddy Wivell, director, adds: “I love this idea – a chance to celebrate that great British institution, the pub. In an age where almost every aspect of our lives can be serviced online, the pub remains a special space. It’s where we come together and share our lives, and asking landlords and customers to turn the cameras on themselves and author their own material is a joyful way to capture that national experience. We wanted the films to feel authentic, homemade and credible – our role was to over prepare, not over produce.”

The series will live on dedicated microsite, appear on TV across the next month and be promoted online and socially.

Grey Raises a Glass to the Great British Boozer in Greene King Brewery Campaign added by Newsroom on October 19, 2015
View all posts by Newsroom →