By Newsroom on July 12, 2013Comments Off on Heineken Challenges Travelers to a Legendary “Voyage”

Are you willing to take a leap of faith and alter your travel plans for a trip to the unknown? Heineken’s global campaign “Voyage” arrives in the U.S. with the debut of a new television commercial “The Voyage” and travel experiment – Departure Roulette.

This omni-channel campaign drops men from across the world into remote global locations, challenges them to become legendary travelers, and shares the stories of their experiences online.

“A legendary voyage cannot be planned. It should welcome random experiences where improvisation is the only way forward,” said Belen Pamukoff, Brand Director, Heineken.

“This summer, in a variety of exciting ways, Heineken is proving the theory that every man has a legendary traveler inside of him by dropping men from all over the world into an environment unlike anything they’ve ever seen.” 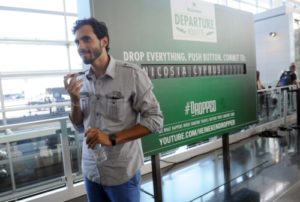 In the USA, travelers 25 years of age or older, arriving at JFK Terminal 8 with tickets and passports in-hand will have the bold opportunity to enter a game of Departure Roulette, where they can change their scheduled destination for a trip to adventurous locations with the press of a button.

The twist? They must be willing to drop their existing travel plans and immediately board a plane to the unknown. The inspiration for Departure Roulette is “Dropped” – a series of episodic adventures wherein Heineken is sending four men to remote destinations around the world and filming their experience, and the bizarre challenges they face, along the way.

“The Voyage” TVC, the inspiration for the “Dropped” and Departure Roulette travel experiments, will officially air on U.S. TV on July 8th, with episodes from the U.S. Dropped adventure launching via Heineken.com and YouTube on July 22nd.

Each Dropped experience will encompass three episodes, complemented with behind-the-scenes content. As the third instalment in the online video series, an American from New York City will be “dropped” in the bustling city of Marrakech to survive his own set of challenges – empty desert land, curious locals and unusual modes of transport.

Heineken Challenges Travelers to a Legendary “Voyage” added by Newsroom on July 12, 2013
View all posts by Newsroom →