By Newsroom on April 3, 2013Comments Off on Heineken Launches TV Campaign to Support UEFA Champions League

As some of the best soccer teams in the world battle it out in the Quarterfinals of the UEFA Champions League, Heineken has unveiled the latest element of its “Road to the Final” campaign with the launch of a new television ad campaign.

The ad demonstrates how, with imagination and resourcefulness, one man is able to witness club soccer’s most prestigious event – the Final itself.

Premiering around the world today, the spot is the latest element of the Heineken’s global integrated “Road to The Final” campaign as it celebrates its seventh consecutive year sponsoring the UEFA Champions League. 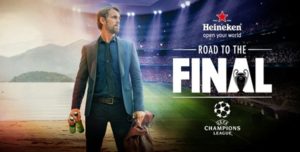 The ad features one lucky fan, who receives a ticket to the UEFA Champions League Final. The only problem is, he’s on the other side of the world and faces a race against the clock to get to the match.

Through a combination of ingenuity, vision and creativity he manages to overcome every obstacle put in his way – to be rewarded with the ultimate soccer experience – a pitch side seat at Wembley, arriving just before kick-off.

To kick-off the “Road to the Final” campaign, Heineken launched the “Heineken Champions” Facebook and mobile app, which offers U.S. fans a chance to win an epic viewing party in their city and enjoy a premium experience like only Heineken can deliver.

Fans over 21 years of age can vote until April 15 by taking a photo of themselves enjoying an UCL match, uploading it to the Facebook tab or mobile app, and tagging their location. Every photo uploaded scores a point for their city.

“We’re delighted to launch the ‘Road to The Final’ television commercial, celebrating the resourceful and quick-witted men of the world who will stop at nothing from experiencing the UEFA Champions League Final,” said Colin Westcott-Pitt, Vice President, Heineken.

“We look forward to watching the Final with a cold Heineken and our consumers at the epic viewing party.”

Heineken’s Facebook fans can also play a pinball game featuring elements of the commercial. Players can compete against each other – and Heineken ambassadors including Clarence Seedorf – to earn bragging rights and UEFA Champions League prizes.

For the Semi-Finals, eager fans will have the chance to engage with Seedorf through Twitter – with the most resourceful receiving prizes for their imaginative responses to Heineken’s task.

The Heineken Champions app is available to consumers on Heineken’s Facebook page and in the Apple store or Google Play for consumers to vote until April 15.