By Newsroom on May 19, 2016Comments Off on Humanaut’s Push for Organic Valley Pokes Fun at Hipster Coffee Culture

Coffee culture has always romanced the origin of the bean, the roasting method and the proper pour-over technique. But Organic Valley dairy farmer Gerrit van Tol recently set out to prove to New Yorkers that the secret to a great cup of coffee is actually his pasture-raised cows.

van Tol launched the Organic Valley Coffee Shop in the trendy NoLita neighbourhood of lower Manhattan. Surprised and slightly confused customers could only order Organic Valley half & half in three sizes—“Lil Bit,” “Double,” and “Lotta”—and then hit the condiment bar to add the coffee for free. All Half & Half pours were $2. 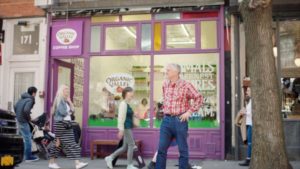 Organic Valley’s creative agency, Humanaut, chronicled van Tol’s journey from the pastoral pastures, to the busy streets of New York City in a long-form web video that spoofs the artisanal maker videos that have become popular on the web. The campaign also includes 60, 30 and 15 second shorter spots that show his secret for a great cup of coffee.

The Organic Valley Coffee Shop at 171 Elizabeth St. was open to the public the weekend of April 16-17. The shop served about 600 hundred delighted—and surprised—New Yorkers. Humanaut partnered with the Bindery and Pink Sparrow to execute the production and build-out of the retail space.

“People who love a rich and creamy cup of joe have been using Organic Valley Half & Half to make the best cup of coffee for over 20 years,” explains van Tol, who managed the store opening and served as cream barista. “But at most coffee shops you have no idea what kind of cream you’re pouring into your coffee, or if it’s even organic. It just made sense that we should have our own coffee shop that focuses on what we believe is the most important ingredient.” 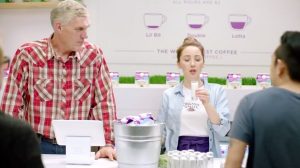 A quarter of all Americans use half & half in their coffee at home and 30 percent use it when they’re in a restaurant. Organic Valley is the number one national half & half brand. The Organic Valley Coffee Shop also offered customers the opportunity to try the only flavoured organic half & half available in the US, Organic Valley’s Hazelnut and French Vanilla.

It was van Tol’s first visit to New York City, and Organic Valley’s first concept store. “New York City is one of the cooperative’s strongest markets,” said Tripp Hughes, Director of Brand Management at Organic Valley. “So, New Yorkers appreciate the rich and delicious half & half that comes from our family farms and the organic cows that graze there on green pastures.”

Humanaut’s Push for Organic Valley Pokes Fun at Hipster Coffee Culture added by Newsroom on May 19, 2016
View all posts by Newsroom →