By Newsroom on November 27, 2015Comments Off on KitKat Cleverly Weaves its Way into the Black Friday Chaos 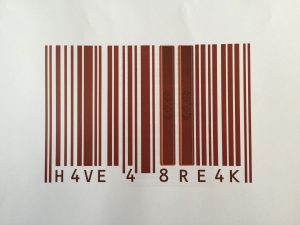 While the majority of the Black Friday frenzy has shoppers scrambling for discounts on electronics and clothing KitKat has cleverly weaved itself into the fold with a new ad which taps into the consumerism and exhaustive nature of the day.

Created by J. Walter Thompson London, the new KitKat ad adopts one of the universal symbols of shopping in the barcode and incorporates the two chocolate fingers into the lines.

James Whitehead, Executive Partner at J. Walter Thompson London, explained, “As Black Friday becomes an increasingly frenetic and exhausting experience for consumers, KitKat has taken the opportunity to share a witty point of view around this annual shopping extravaganza.”

The ad will run across KitKat’s social channels and in November 27’s Metro newspaper. The campaign will also feature OOH advertising at spots such as Westfield.

KitKat’s decision to run a Black Friday ad reflects the increasing popularity of the once American shopping event which was evident in last year’s coverage which saw overcrowded stores, low stock and even scuffles breaking out. This year many retailers have opted out as it becomes the domain of online sellers and are instead offering a seamless experience over a longer trading period.

KitKat Cleverly Weaves its Way into the Black Friday Chaos added by Newsroom on November 27, 2015
View all posts by Newsroom →