By Newsroom on April 28, 2018Comments Off on Lola MullenLowe’s Cornetto Campaign is a Summer Love Story Full of Magic

We’ve all done it and we’ve all regretted it. Trying way too hard to make a first move on your crush. If only someone had been there to steer us in the right direction like Cornetto does in their latest campaign.

Studies show that perfectionism among young people is on the rise and fear of failure, especially when dealing with someone you like, can be a source of anxiety for teens.

Cornetto wants to connect with teens so they zeroed in on the insight that when you have a crush on someone you tend to overcomplicate things and become more prone to making embarrassing mistakes – a potentially hazardous situation for a teen. 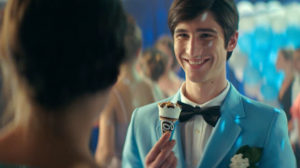 a brand that has been talking to teens about love for decades, wanted to remind them that sometimes it’s better to keep it simple.

The first TVC shows a charming young magician trying to get the attention of his crush, but what starts out as a simple trick quickly grows into a spectacle.

“Cornetto has always been about celebrating teen love in an entertaining and light-hearted way. With this campaign, we wanted to empathise with teens and encourage them to keep it simple.” says Ian Maskell, Global Vice President, Wall’s Impulse.

The TVCs will be on air starting April 25th in select markets across the globe including Italy, Turkey, Spain, Indonesia, Thailand and Pakistan. The campaign includes outdoor, press and radio.

Lola MullenLowe’s Cornetto Campaign is a Summer Love Story Full of Magic added by Newsroom on April 28, 2018
View all posts by Newsroom →