By Newsroom on March 3, 2016Comments Off on Look Back on 75 Years of M&M’s Ads with BBDO NY’s Candyman Remix

To celebrate the brands historic 75th anniversary, M&M’s is launching a major initiative that will bring the celebration to its fans – all year long.

Created by BBDO New York, the campaign, themed ‘Celebrate with M,’ will include a number of elements, including the release of ‘Candyman,’ a modern remix of Sammy Davis Jr.’s The Candy Man song (1972). 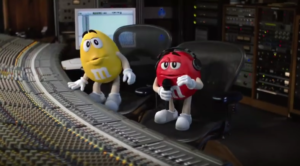 The song is recreated by crooner Aloe Blacc and EDM-artist and producer Zedd in partnership with M&M’s.

“I’m super excited to team up with Aloe to finally share our reimagined version of ‘Candyman.’ We were totally inspired to put a completely fresh spin on the song, which is already such a classic,” Zedd said in a statement.

Blacc added: “I’m inspired by greats like Sammy Davis Jr., so I was really excited to revisit ‘The Candy Man” with Zedd and make it our own.”

The major initiative is also being accompanied by a dedicated webpage where fans can remix their own version of the iconic song and share on their social pages.

Look Back on 75 Years of M&M’s Ads with BBDO NY’s Candyman Remix added by Newsroom on March 3, 2016
View all posts by Newsroom →