By Newsroom on October 14, 2016Comments Off on Lucozade Sport Surprises Unsuspecting Commuters with Impromptu Fitness Sessions at a Bus Shelter

Lucozade Sport have taken a fresh approach to utilising digital out of home with impromptu live stream fitness sessions at a bus shelter aimed at unsuspecting members of the public. 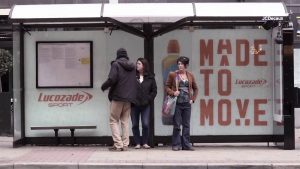 The ‘Wait training’ campaign launched October 14 and was devised by creative agency Grey London, with MediaCom overseeing the advertising buying.

The fitness instructor led sessions took place at a bespoke bus shelter in Manchester, installed with live streaming capabilities. The ad for the campaign shows awaiting passengers at the bus stop being started by the trainer who appears on screen and calls on them to join in on a quick fitness class after which they are rewarded with a bottle of Lucozade Sport. 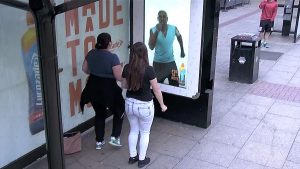 The stunt is part of a wider campaign from Lucozade owner Suntory to get a million people moving more by 2020.

Kay Bartlett, brand manager at Lucozade Sport, said: “Converting a bus stop shelter into a live interactive exercise area, whereby a trainer will encourage the British public to take part in a variety of exercises from Zumba to Boxercise, shows that we are committed to achieving our target of getting one million people moving more by 2020.” 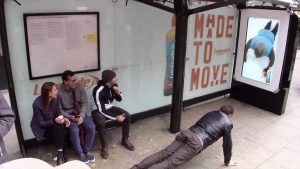 “To reinforce the campaign idea ‘Made to Move’ we’ve created a nice bit of fun to get unsuspecting people moving when they’d typically be sitting down waiting for a bus, to then sit down again on a bus later,” said Goldman.

MediaCom’s business director, David Munt, added: “It was really exciting to bring to life a brand purpose in such a direct and innovative way. Lucozade Sport is all about getting people moving and we’re thrilled to have been able to do this, in such a physical way.”

Lucozade Sport Surprises Unsuspecting Commuters with Impromptu Fitness Sessions at a Bus Shelter added by Newsroom on October 14, 2016
View all posts by Newsroom →