By Newsroom on January 4, 2017Comments Off on Maltesers Unveils Braille Billboard in Next Phase of Disability Campaign 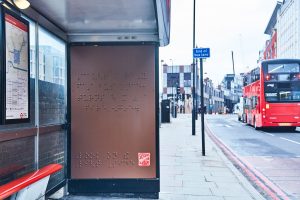 Maltesers has launched a billboard in London written entirely in Braille as it continues its efforts to better represent disability in advertising.

The poster comes after the Mars Inc. owned brand released three TV ads featuring disabled actors during the Rio Paralympics in September. The spots won a Channel 4 competition awarding £1m in airtime to the best creative idea featuring disabled people. One of those, about a deaf woman whose hearing aid is swallowed by a dog, aired for the first time using British Sign Language and no subtitles.

The new ad is made of Braille, the tactile writing system used by visually-impaired people, with the dots formed of model-made Maltesers. The poster will be accessible for everyone through a combination of audio description and a translation on Maltesers UK’s Facebook page.

The billboard marking World Braille Day will run in Farringdon from January 4-15.

Like the previous TV ads, the poster is part of Maltesers’ “Look on the light side” campaign, which launched in summer 2015. It was inspired by a true story from a focus group led by Maltesers and disability charity Scope.

The ad was created by Lucy Jones and Charlotte Maher at Abbott Mead Vickers BBDO. MediaCom is the media agency.

Michele Oliver, the vice-president of marketing at Mars Chocolate UK, said: “As one of the UK’s biggest advertisers, we have a responsibility and a role to play in championing greater inclusivity in our advertising and communications. Maltesers is the brand that looks on the light side of life and this scenario is just one example of the real-life, everyday experiences of people affected by sight loss; and in this case from Michelle in Glasgow. This small-scale activation is a natural next step in our ambition to get closer to our consumers, by normalising disability in advertising and communications, and using humour to challenge preconceptions.”

Maltesers Unveils Braille Billboard in Next Phase of Disability Campaign added by Newsroom on January 4, 2017
View all posts by Newsroom →