By Newsroom on September 6, 2017Comments Off on McCain takes its new Rustica pizza to the streets in its newly launched campaign 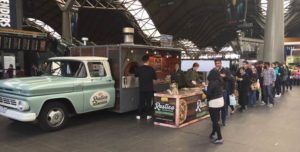 If there’s one meal on the planet that gets your tastebuds salivating when cooking, it’s pizza. It’s the aroma of a pizza baking in the oven that tantalises the senses. This is one of the reasons why McCain Foods decided to take its new sourdough crust pizza range, Rustica, to the streets in Australia.

Shopper engagement specialist, Extravert, has partnered with McCain and sourced a 1962 Chevy Truck from the US that has been converted into a rustic pizza kitchen.

McCain launched its Rustica frozen pizza range (Spinach and Mozzarella with sun-dried tomatoes, Margherita with fresh herbs, and Four Cheese) earlier this year and believes the investment in live engagement and sampling that will reach thousands of people will be a beneficial investment. 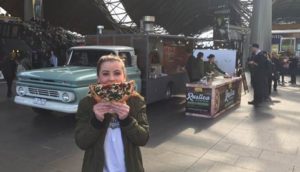 Simone Formisano, brand manager, McCain Foods Australia and New Zealand said: “We want to change people’s perception of frozen pizza. Many consumers don’t believe that a frozen pizza could taste as good as Rustica, hence our reason for investing in the pizza truck. By getting consumers to try it, they taste that Rustica pizza can deliver a top quality pizza in the comfort of their own home.”

Daniel Cormack, senior account director, Extravert said: “Sampling and experiential campaigns are not used to replace traditional advertising but in conjunction with them to reinforce the brand and product. They bring brands to life with colour, emotion and engagement and in the case of McCain, the distinctive pizza aroma. Even after we have only completed a few locations, we know that our brief — to demonstrate that finally, there’s now a quality woodfired pizza in the freezer — has been achieved. The public’s response has been fantastic.”

McCain takes its new Rustica pizza to the streets in its newly launched campaign added by Newsroom on September 6, 2017
View all posts by Newsroom →