By Newsroom on November 17, 2017Comments Off on McDonald’s Gets #ReindeerReady with Adorable Christmas Film

Leo Burnett London has created a Christmas campaign for McDonald’s focused around the anticipation and excitement of Christmas, with work that builds on the magic in the air as everyone prepares for the big day.

The creative is delivered through the lens of one little girl’s excitement for the arrival of Father Christmas’s reindeer, as McDonald’s helps to get the UK #ReindeerReady. 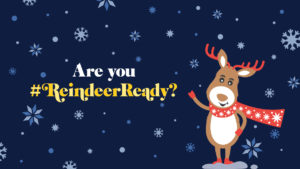 A 90 second film tells the young girl’s story as she decides to take her last carrot stick home for the reindeer on Christmas Eve. She carries it very carefully through the hustle and bustle of Christmas-time on the high street, much to the admiration of her dad, who we realise will do anything to help her out on her mission.

The narrative then follows the girl and her father as she carefully carries the carrot home, before realising Father Christmas has more than one reindeer. Her dad then supports her in her quest to find enough carrots for the fictional animals in time for their arrival.

Channel 4 will air the exclusive broadcast premiere, negotiated by OMD, on Friday 17th November 2017 during Friday night’s ‘Gogglebox’, which begins at 9pm. In the build-up viewers will see bespoke 10 second teasers across Channel 4’s schedule featuring carrots, crafted in the shape of the iconic Channel 4 blocks, being eaten by a reindeer. Special edition carrot stick packaging will also be available in restaurants.

Alongside TV, the story is told on Snapchat with McDonald’s partnering with the innovative camera company to create a first of its kind hub where customers can unlock a Reindeer Face Lens, a festive Filter and an exclusive ‘Carrot Run’ game – built by MPC Creative. This hub can be unlocked by scanning Snapcodes on millions of items of Christmas packaging or by swiping up on special McDonald’s Snap Ads that will be available to the 10m+ daily Snapchatters in the UK. 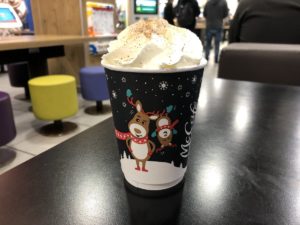 The Reindeer Face Lens will also run as a National Lens campaign on Saturday 18th November.   Furthermore, McDonald’s will update their existing Chain Filters during the period to match the #ReindeerReady campaign, as well as running Snap Ads promoting the Christmas menu.

The #ReindeerReady campaign concludes by surprising families in restaurants with free packs of carrot sticks, rebranded as Reindeer Treats, and a very special version of the film on Christmas Day.

Emily Somers, Vice President, Marketing and Food Development, at McDonald’s UK, said: “We are very excited to unveil the creative campaign we’ve been working on for Christmas 2017. Our campaign focuses on the anticipation, excitement and little moments of magic the run-up to Christmas brings. Our TV focuses on one little girl’s preparation for the big day, saving a carrot stick for the reindeer, a tradition the whole country will relate to. The wider campaign is also designed to reflect those moments of preparation that we all go through at Christmas. We can’t wait for people to see our campaign and look forward to seeing people all over the country be inspired to get #ReindeerReady.” 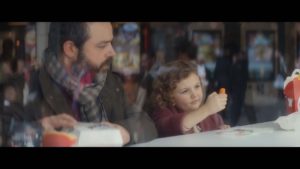 Chaka Sobhani, Chief Creative Officer, Leo Burnett, added: “We’re so proud to be launching our most ambitious Christmas campaign for McDonald’s yet, with loads of treats and surprises in store for our customers and audiences. With playful unique Snapchat filters, a mobile reindeer game and branded Christmas carrots, we hope the story of our little girl (and her dad) warms the hearts of the nation, captures the magic of the Christmas spirit and has everyone asking that all important question, are you #ReindeerReady?”

Pete Conolly, Creative Director, MPC Creative said:, “This the first time we’ve built a bespoke game for this platform and it’s been great fun, as well as a learning process for our team. It’s encouraging to see a brand like McDonald’s embracing Snapchat to generate some fun, online content aimed directly at their audience.”

Chris Braithwaite, Agency Principal, Channel 4 Sales said: “McDonalds’ advertising is of the highest quality, and debuting their Christmas campaign with bespoke Channel 4 festive idents is a real coup. We can’t wait for Gogglebox viewers to enjoy seeing it first.”

McDonald’s Gets #ReindeerReady with Adorable Christmas Film added by Newsroom on November 17, 2017
View all posts by Newsroom →