By Newsroom on May 8, 2018Comments Off on Mike’s Hard Lemonade Releases Series of Quirky Ads Ahead of Summer

With summer just weeks away, Mike’s Hard Lemonade is pushing its signature lemony malt beverage in a campaign that riffs off of internet humor. 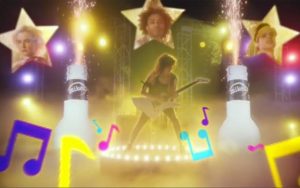 campaign is a continuation of the brand’s ‘Drink on the Bright Side’ effort, which launched last year in a bid to appeal to males aged 25-29. The latest iteration of the campaign is once again targeting that demographic with a series of zany videos featuring bizarre scenarios involving Mike’s Hard Lemonade.

One spot shows an office worker making his way to what appears to be a run-of-the-mill work happy hour. After cracking open a bottle of Mike’s Hard Lemonade, he’s greeted with a celebration that involves cake, balloons, a floating taco, and people dressed in cactus and astronaut costumes.

The campaign also includes a few six-second ads, one of which features bottles of Mike’s Hard Lemonade jumping on mini trampolines. The ads were created by The Annex, an agency that’s part of the Havas network.

Later this week, the brand is marking the launch of the campaign with a pop-up experience that will kick off in New York City. Called The Bright Side, the pop-up has been designed to “celebrate and amplify the happiness inside each bottle” of Mike’s Hard Lemonade. The pop-up, created by Havas Formula, will make its way to Chicago and Los Angeles this summer.

Mike’s Hard Lemonade Releases Series of Quirky Ads Ahead of Summer added by Newsroom on May 8, 2018
View all posts by Newsroom →