By Newsroom on February 10, 2017Comments Off on Milka’s New Ad Shows the Best Faces Reacting to Less Palatable Foods

To trigger nostalgia over the first time customers tasted one of its milk chocolate squares, European brand Milka has launched “First Tastes,” a digital campaign that explores other, less tender first bites.

Among them is the first time a woman eats octopus, a boy eats pickles, a baby tries a lemon, or—funnier still—a grandmother is served Pop Rocks. Each resulting reaction is meticulously filmed and played out to maximize the drama.

Halfway through, the ad observes, “Some first tastes are more tender than others,” and cuts to a little girl, whose mother offers her Milka for the first time. Set up almost like a coming-of-age, it’s a cloyingly idyllic moment where both gaze at each other in giddy intimacy while the girl—hair braided, of course—pops it into her mouth.

Her reaction is much different from those we saw earlier.

Created by Buzzman Paris, the ad that debuted on January 30 in France and will extend to a number of European markets — Italy, the Czech Republic, Poland, Slovakia, the Netherlands, Spain, Belgium, Austria, Germany, Slovenia and Croatia.

Conveniently, the only words are the little slice of aforementioned copy, followed by the brand and its tagline: “Milka. Tenderness is inside,” making it easy to translate and push.

The real heavy lifting is done by crisp visuals of the food—that curved octopus tentacle is fat, sinister and gorgeous—and the faces of the actors, who effectively transmit incredulity, suspicion, curiosity, shock and revulsion, the better to juxtapose with the illuminated face of the girl at the end.

Milka was born in Switzerland in 1901, which gives it a long, elaborate history. Today it’s owned by Mondelez, but much of its relationship to users in European markets hinges on nostalgia. Aptly, what we see here is a mother creating just such a relationship for her child, who will remember that tenderness throughout her life—probably most often after a less tender day at work. 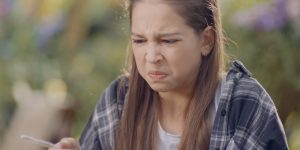 Of course, the same could be said of most any kind of milk chocolate—provided it’s not the “chocolate soup” my parents gave me when I was little, which was actually a stew of pig intestines cooked in blood.