By Newsroom on November 15, 2018Comments Off on Nature’s Path Pushes 30-Year Organic Heritage with New Look 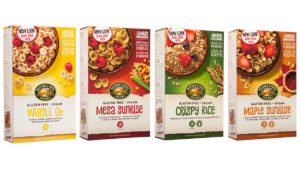 Following hot on the heels of launching four new products, the UK’s leading gluten-free cereal brand Nature’s Path has revamped its packaging. The vibrant designs not only give a genuine ‘family’ feel to the brand’s extensive range of cereals, but greatly increase stand-out on shelf and also add real vibrancy to the entire fixture.

Crucially, the designs also give heightened prominence to Nature’s Path’s core ‘Always Organic’  messaging. Organic is at the very heart of the brand – its founder’s father, Rupert Stephens, was one of the key figures in the nascent organic movement and his beliefs guide Nature’s Path to this day. And, with organic increasingly important to UK consumers, the brand’s well-placed to continue to take advantage.

Victoria Hughes, Nature’s Path Marketing Manager at Euro Food Brands said:  “Being able to create such popular gluten-free cereals comes down to the quality of ingredients – and where that perfectly matches consumer demand is in organic. Organic means trust and integrity in the food chain – and we know that this will only become more important to people. Giving increased prominence to it made perfect sense, especially because we’ve been at the heart of the organic movement from day one – it’s our DNA, not just a ticked box.”

Nature’s Path’s dominance in the UK is largely down to its well established best-sellers, Mesa Sunrise and Nice & Nobbly Mixed Berry Granola. Mesa Sunrise remains the UK’s No.1 gluten-free cereal, while the latter is the country’s best-selling gluten-free granola. Adding new impetus to this market dominance has been innovative NPD work.

In the past year, the brand’s introduced two ‘Superflakes’ adult cereals – which are not only gluten-free, but dairy-free and feature sprouted grains. In addition, a duo of children’s cereals has been added – Choco Chimps and Leapin’ Lemurs – under its ‘Envirokidz’ charity banner.

As part of the revamp, the brand’s UK website has been overhauled for greater ease of navigation and increased focus has been given to sampling, Social Media and PR. Layered on top is Nature’s Path’s continued partnership with Coeliac UK, including headline sponsorship at its Food Festival.

Given its heritage, commitment to organic, ongoing NPD and a bold new look, Nature’s Path remains one of the strongest brands amongst RTE gluten-free cereals – a category where brands dominate, with a massive 89% share of sales.