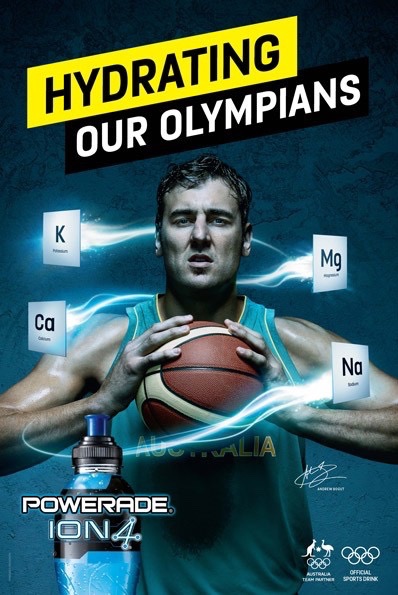 Coca-Cola South Pacific has announced details of Powerade’s 2016 Olympic Games campaign, as the brand seeks to leverage its connection with the Olympic Games which spans over two decades. Powerade was born at the Barcelona 1992 Olympic Games and this year marks 24 years of Powerade as the official sports drink of the most viewed sports event in the world.

Backed by a multi-million dollar media investment, the campaign aims to position Powerade as the catalyst of hydration and inspiration for the Rio 2016 Olympic Games. Australian Olympian and 2015 NBA champion Andrew Bogut has been brought on as Powerade’s official Olympic Games ambassador and the face of the national marketing campaign. This includes featuring on the packaging of the limited edition new Mandarin flavour Powerade ION4 Rio Victory, available in stores nationwide now across a wide variety of retail channels.

The Golden State Warriors star will appear prominently across Powerade’s new Olympic Games TVC, out of home advertising, experiential activity and impactful point of sale merchandise. Bogut will also champion the brand across its digital platforms, heroing the new flavour and how it can hydrate Olympians by replacing four of the electrolytes lost during sweat.

Bogut commented: “I’m excited to be part of the Powerade Olympic Games campaign. The brand has always had a close association with the Games and is synonymous with promoting the importance of hydration during sport. My kit-bag will be well stocked with Powerade ION4 throughout the Games to keep me going – hopefully all the way to the finals.”

Sonja McCarthy, brand manager, Powerade said: “Powerade has been synonymous with sporting excellence since it was launched at the Barcelona 1992 Olympic Games and it has been keeping athletes hydrated ever since. Our goal now is to inspire our athletes to perform to their best at Rio. The Rio 2016 Olympic Games represents the biggest event in the world with the London 2012 Olympic Games drawing 3.6 billion viewers. This time round, we want to capitalise on these figures by reaching consumers in creative and impactful ways through a significant marketing campaign which includes out partnership with NBA champion Andrew Bogut. It’s an exciting occasion for Powerade and we hope to capture the attention of consumers and inspire the nation, just as our athletes will as they compete in Rio.”