Nescafé Continues to Experiment with Digital in Latest #BigStart Drive

By Newsroom on January 6, 2016Comments Off on Nescafé Continues to Experiment with Digital in Latest #BigStart Drive

Nescafé has released the latest installment of its ‘Big Start’ multi-platform series as it looks to create more sharable content.

The campaign, which has been running across social, on TV and on YouTube, has seen the coffee company tour the UK to give unsuspecting Brits a manner of unusual wake up calls – from celebrity appearances to unexpected gifts.

Rooted in the morning routine, the push was devised by Iris, with the latest spots featuring a school run surprise and an al fresco orchestra. 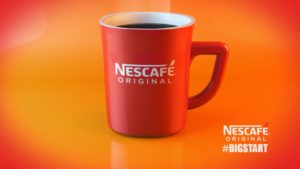 Supported by an on-pack promotion which invites customers to nominate a deserving Big Start candidate online, the series has racked up over 15m views so far and over 50,959 likes across Facebook and Twitter.

Frankie Etherington, assistant brand manager at Nescafe said: “As our first digitally led campaign on the brand, the response to the creative has been outstanding and we are delighted with the results.”

Iris’ executive creative director Andy Taylor added: “We wanted to build a participative, authentic and sharable heart-warming campaign platform – one that embodied the product’s role in our lives.”

At the end of 2015, Nescafé revealed that it was looking to further diversity its digital output over the coming year.

Nescafé Continues to Experiment with Digital in Latest #BigStart Drive added by Newsroom on January 6, 2016
View all posts by Newsroom →