By Newsroom on February 22, 2016Comments Off on Oreo Brings its ‘Wonder Vault’ into Virtual Reality

Oreo is the latest brand to jump on the virtual reality (VR) bandwagon with a film that takes viewers on a whimsical tour of its ‘Wonder Vault,’ the magical place where its cookie flavours are dreamed up. 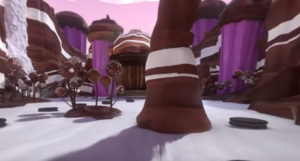 In the film, viewers are walked through what looks like a VR version of Candy Land to see how the brand’s latest creation, Filled Cupcake Flavoured Oreos, are made.

Viewers can use Google’s Cardboard headset to watch the film, which marks Oreo’s first foray into VR.

The video, which was created by digital agency 360i, will be shared across Oreo’s social channels.

Oreo introduced the concept of its ‘Wonder Vault’ to viewers earlier this year in a seperate, non-VR video.

Oreo Brings its ‘Wonder Vault’ into Virtual Reality added by Newsroom on February 22, 2016
View all posts by Newsroom →