By Newsroom on November 27, 2017Comments Off on Pepsi Max Encourages People to Try New Traditions in Latest Christmas Ad

Pepsi Max’s latest integrated Christmas campaign has been released with the aim of inspiring consumers to try a new tradition this festive season.

The campaign, #TryitLoveit, which was shot in Iceland with professional surfer Heidar Logi leading fellow surfers who, instead of watching TV on Christmas, chose to surf at night amongst the Icelandic waves on their LED lit surf boards. The advert saw them finish their surfing off with a campfire while drinking Pepsi Max. 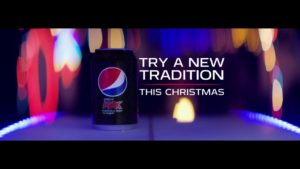 The ad was conceptualised AMV BBDO and produced by Great Guns and will run across TV, digital, cinema and OOH, in a partnership with Channel 4. The film premiered on TV during “I’m a Celebrity, Get Me Out of Here” on ITV on November 25.

Mark Kirkham, head of marketing and innovation, PepsiCo West Europe Beverages, said: “Our summer campaign centred on the idea that people love the taste of Pepsi Max. Those who don’t, just haven’t tried it yet. As a brand that values the bold and unexpected, we are extending this notion into our Christmas campaign by reminding them to break tradition and keep things fresh, by trying something new at a time of year when routine and ritual is often habit.”